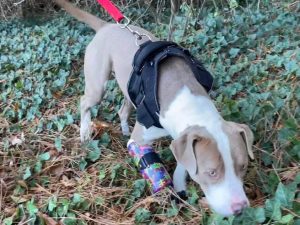 “Nubby” sports his new prosthetic leg after receiving emergency care from the Heart of LCAC and Clinton Animal Hospital.

A nonprofit organization created to help Laurens County Animal Control and the dogs it takes in has been forced to at least temporarily cease operations due to a lack of funds.

Betty Burns, who heads up Heart of LCAC, said the volunteer organization has been short on funds as the Laurens County Animal Shelter has been at or over capacity for several months.

Heart of LCAC is currently trying to pay about $2,000 it owes to the Clinton Animal Hospital for emergency animal care it has provided to dogs taken in by the county’s animal control unit, including “Nubby McStubberson,” a pittie found chained without medical attention after being hit by a car in June.

“Nubby” had chewed off part of his leg after it was wrapped up and died while still attached on his body. Clinton Animal Hospital amputated the rotted limb and Columbia-based Carolina Prosthetic made Nubby a prosthetic leg.

“The shelter has stayed over capacity for a while now, so we’ve had to use more supplies than normal,” Burns said.

The organization has continued to purchase the medical supplies for heartworm preventatives and other supplies it donates to the shelter to help it defray costs while also helping to fund emergency care for cases like Nubby’s. It also funds spay and neutering surgeries for dogs taken into the shelter.

For Burns and the other Heart of LCAC volunteers, it is a labor of love for the animals who need them.

But it is also costly.

Donations to the Heart of LCAC can be made directly to Clinton Animal Hospital at called 864-833-2487 or in person at 404 Willard Road in Clinton. Donations can also be made via the Heart of LCAC Facebook page and through PayPal.