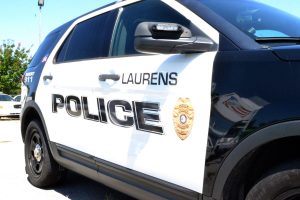 were awakened early Monday morning by Laurens police seeking a possible shooting victim from a call that was later determined to be a hoax.

“It sounded allegedly like a small child who made the phone call saying her daddy had killed her mommy,” said Lt. Scott Franklin, Public Information Officer with the City of Laurens Police Department. “She said her name was Cassidy and she was six years old and she gave a street address on Moreland Ave. When we arrived we called everyone out of the house and verified that no one had made a call from that address. Out of an abundance of caution we did a canvas of the neighborhood and ruled out any danger in every possible home in the neighborhood.”

While there was no SWAT team, there were eventually nine officers or investigators involved because they needed to knock on quite a few doors in their canvas of the neighborhood.

Franklin said officers contacted the Laurens County Sheriff Office and other law enforcement agencies in neighboring counties which had addresses matching or similar to Moreland and suggested that they make welfare checks.

“Out of an abundance of caution we were trying to rule out everything,” Franklin said. 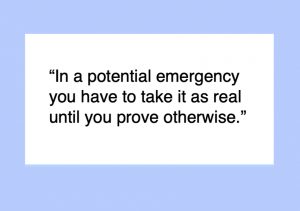 Officers contacted District 55 School Resource Officers to try and make sure there were no children who matched that name and age. Then a subpoena of the call information from the company that handles the phone service showed the call originated from a Baton Rouge, La., area.

“The company determined it was a most likely an autogenerated phone number,” Franklin said.

Several reviews of the incoming call revealed that possibly it was an adult trying to sound like a child, and eventually the department determined the entire call was a hoax.

“When a call goes into the 911 Center the address comes up, but it came into the administrative office and at 3 and 4 in the morning calls are forwarded to the dispatch so you don’t get the location of the number. That a call would come to the administrative number was a red flag for us, but in a potential emergency you have to take it as real until you prove otherwise.”

He said while people were obviously surprised to be awakened, residents understood when the situation was explained.

Autogenerated and “Spoof” calls are becoming more common and they are almost impossible to trace, Franklin said. And while some scammers are seeking ways to steal funds, others are simply trying to cause disruptions.

Some cities have had issues with “Swatters,” in which someone will, often as a joke on an acquaintance, call law enforcement claiming there’s an actual emergency or serious crime being committed at a real person’s address.

“It’s seen among some gamers who want to get back at someone they’re playing online with, and they think it’s going to be funny to have a SWAT team show up at their friend’s house,” Franklin said.

The person making the hoax call can be charged with a criminal offense, and it can also be very dangerous.

“They don’t realize the inherent danger ,” Franklin said, “because when they call law enforcement for something very serious we have to respond, and it certainly causes what can be a very dangerous situation.”