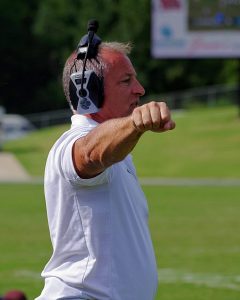 Kevin Kelley resigned after one season at Presbyterian College as head football coach.

The Kevin Kelley experiment at Presbyterian College lasted one season.

Kelley resigned Saturday as head football coach at PC eight months after being hired to replace the fired Tommy Spangler. Kelley, known as “the coach who never punts” and his analytics-driven offensive system, went 2-9 in his only season at PC. The Blue Hose won their first two games against NAIA competition before losing nine straight games to end the season.

“I have decided to leave Presbyterian College to pursue other football interests,” Kelley said on Twitter after PC released a statement announcing the move. “I am proud that we were No. 1 in passing and No. 3 in the country in total offense at a school without scholarships and the first practice being only four weeks before the first game.

“I am appreciative of Presbyterian College President Matt vandenBerg and (Athletic Director) Rob Acunto for the opportunity that I had and for all the support I was given. I am so thankful to the coaches, players, staff and my family as well.”

Kelley arrived at PC in May after 18 seasons at Pulaski Academy in Arkansas, where his unique offensive schemes and theories led to nine state titles in 11 trips to the state finals.

That success went unmatched at PC despite two lopsided victories to begin the season – 84-13 over St. Andrews and 68-3 over Fort Lauderdale.

In the announcement of Kelley’s departure Saturday, PC officials said they are beginning their second national search for a new head coach of 2021.

While Kelley said he is pursuing other football opportunities, PC said he was stepping down “for personal reasons.”

“Although disappointed that he is leaving PC, we respect his decision to step down and wish him nothing but the best moving forward,” Acunto said.

Acunto said PC will engage a national search firm to build a strong candidate pool. PC will provide an update once the search for a new coach concludes.

Kelley was hired a little more than two weeks after Spangler was fired just three days after the Blue Hose completed a 4-3 spring season brought about by COVID-19, PC’s first in the non-scholarship Pioneer Football League. It was also PC’s first winning season since going 6-5 in 2014 under Spangler.

Immediately following the 2021 fall season, at least seven undergraduate players announced their intentions to the enter the NCAA transfer portal.

vandenBerg reiterated that PC is committed to rebuilding its football program, which last had sustained success at the NCAA Division II level.

“Change can be difficult, but it can also present important opportunities for growth and continued improvement,” vandenBerg said. “Our PC community is resolutely and passionately committed to the success of our student athletes and our football program. We will invest the time, energy and resources required to continue to build on our championship culture. We believe our best days as a football program and a college are ahead of us.”

Kelley was PC 16th head coach in more than a century of football. Four of those head coaches have come and gone since the move to NCAA Division I in 2007.