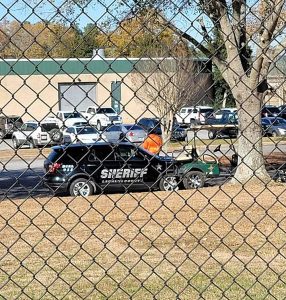 Investigators from the Laurens County Sheriff’s Office responded to Laurens District High School Friday after messages were circulating saying a shooting would occur at the school at 2 p.m.

The Laurens County Sheriff’s Office responded to the scene and began an investigation.

The LCSO released two statements on its Facebook page. The first read, “We are aware of electronic messages circulating around Laurens High School. We are looking into all aspects, however there is no active situation occurring. Please remain calm and allow us to fully investigate. We assure you that the safety of the students and staff is top priority and we are working diligently.”

Later on, the LCSO said on Facebook that it had found no “credible threats.”

“We have not established any credible threat at this time at Laurens High School. We are still checking out all avenues to ensure the safety of all students and faculty. Please continue to be patient and calm as we continue our work,” the post read.

District 55 also released a statement on its social media around 2:30 p.m.

“Laurens County School District 55 High School has requested additional support from Laurens County Law Enforcement as we investigate safety concerns at the high school that have been brought to the attention of the administration” the post read. “The school is currently in a “hold” pattern, meaning that students and staff are in secured and supervised areas. Law enforcement and district officials are actively on-site and will update as information is available. Please be assured that there has NOT been any sort of incident; however, we are taking appropriate measures out of an abundance of caution for all students and staff.”

A threatening message Friday from the suspect.

The threat comes just three days after a student at a high school in Michigan shot and killed four students at Oxford High School and injured six other people, students and teachers. Oxford is located in a Detroit suburb.

A 15-year-old student has been charged in the murders, and his parents on Friday were charged with involuntary manslaughter for their roles in purchasing the handgun used in the shooting.