Clinton LB Bryson james (25) was named Region 3-3A Defensive Player of the Year this past week, and made the Laurens County Touchdown Club all-county team Tuesday.

Both Laurens and Clinton were well-represented this past week as their respective all-region football teams were announced.

On Tuesday, the Laurens County Touchdown Club also announced its all-county team. The team will be recognized at the Touchdown Club’s annual banquet next Wednesday (Dec. 8) at The Ridge.

LDHS placed four players on the All-Region 2-4A squad, while Clinton dominated the All-Region 3-3A team with 11 players, including Defensive Player of the Year Bryson James, a junior linebacker.

Clinton head coach Corey Fountain was also named Co-Coach of the Year along with Chapman’s Harry Cabaniss. Fountain led the Red Devils to an 11-2 record and to the third round of the Class 3A state playoffs.

Vanderbilt commit Jayden McGowan led the Raiders on the All-Region 2-4A team. McGowan was a do-it-all athlete, leading LDHS on special teams with two blocked kicks, 13 punt returns for 187 yards and a touchdown and eight kickoff returns for 177 yards to go with 38 catches for 578 yards and seven touchdowns at wide receiver.

Clinton offensive linemen Naiim Mayes (6-3, 190, Jr.) and Peyton Pitts (6-6, 295) after paving the way for a Clinton rushing attack than rolled up 3,548 yards and 57 touchdowns. Pitts, a senior, will also appear in the upcoming North-South All-Star Game on Dec. 11. The county Player and Coach of the Year will also be recognized at the banquet.

Also on offense, running back Jishun Copeland (856 yards, 16 TDs) was named to the team as a freshman. Senior running back/kick returner Jykorie Gary (865 yards, 14 TDs) was named as an athlete as was senior quarterback Davis Wilson and senior defensive back Zecheriah Johnston. 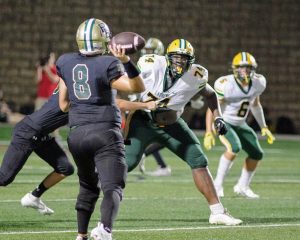 Below is a list of the all-county team as chosen by the Laurens County Touchdown Club:

Notes: Clinton QB Davis Wilson, who is projected as a tight end or safety at the next level, received a preferred walk-on offer this past week from The Citadel. . . . LDHS LB/RB Zy Todd recently picked up his first college offer from Limestone.The LDHS football team is teaming up with the Laurens County Sheriff’s Office for its annual toy drive. Anyone interested can drop off a new, unwrapped toy at LDHS or contact a player by Dec. 11.