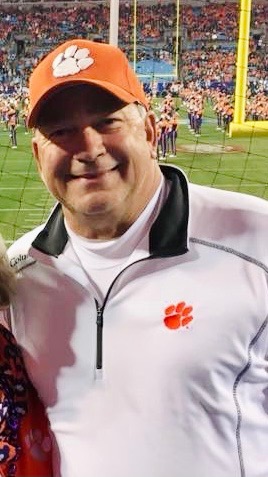 Born in Laurens, Mike was the son of the late James Edward and Lois Bailes Simmons. He was a 1977 graduate of Clemson University and member of Alpha Tau Omega fraternity. Mike was the former owner/operator of Midtown Paint Shop where he never met a stranger. He was a board member and avid golfer at Lakeside Country Club. Mike was also a member of First Baptist Church in Laurens and a member of Palmetto Investment Club.

In addition to his wife, he is survived by: three daughters, Ashley Simmons Robertson and husband Josh of Seneca, Lindsay Simmons Edwards and husband Chad of Gray Court, and Sydney Simmons Parrish and husband Eric of Simpsonville; one sister, Kelly Simmons Sheppard and husband Tim of Pickens; grandchildren, Landon, Carrington, and Grayson Robertson, Parker Wilson, Brianna and Connor Edwards, Weston and Cameron Parrish; and two granddaughters on the way.

In addition to his parents, he was predeceased by a sister, Leslie Bailes Simmons.

A memorial service will be held at 2:00 PM, on Tuesday, November 30, 2021, at First Baptist Church in Laurens conducted by Dr. David Hull and Rev. Tommy Cox.

The family will be at the home and will receive friends immediately following the memorial service.