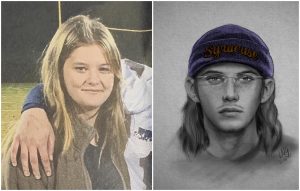 Missing girl Maddison Reynolds, left, and police sketch of a “person of interest” in the case.

UPDATE: The Laurens County Sheriff’s Office is reporting that Maddison Reynolds has been located and is safe. According to reports Reynolds was located along a roadside in Greenville County. No other details are immediately available.

A 12-year-old girl who apparently ran away from a residence on Abercrombie Road in Fountain Inn early Monday morning was still missing early Wednesday.

Investigators from the Laurens County Sheriff’s Office also released a sketch of a man described as a “person of interest” in connection with the whereabouts of Maddison Reynolds.

Reynolds was last seen around 3:30 a.m. Monday near Abercrombie Road.

LCSO Chief Deputy Chris Martin said the sketch is based on a description investigators received Tuesday afternoon, but they still do not have an identity for the male “person of interest.” It is also unclear as to whether Reynolds and the male know one another, he said.

“We’re trying to get that sketch out there in the hopes of gaining some knowledge about him,” Martin said. “Maybe we can get a possible name and a possible address – anything like that so we can get it narrowed down to who he might be.”

Tuesday night, law enforcement circulated home security photos of a man who resembled the sketch, but have since determined those photos to be irrelevant.

Martin said Reynolds’ family is “in shock” that she has apparently run away.

In addition to the LCSO, the FBI, SLED and Greenville County Sheriff’s Department are involved in the investigation.

Anyone who has seen Reynolds or has any information on her whereabouts is asked to call 911 immediately.