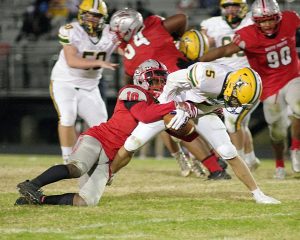 ROCK HILL – Region 3-4A champion South Pointe has spent the past eight years dominating the area in region play.

In the second round of the Class 4A playoffs Friday, the Stallions turned their attention and that domination to Laurens, ousting the Raiders from the playoffs with a 47-20 victory.

South Pointe scored the first 27 points of the game and led 27-0 before Laurens finally got on the scoreboard with a 42-yard touchdown pass from James Rawl to Jay Pulley with two minutes, 18 seconds left in the second quarter.

But South Pointe negated the speed advantage the Raiders enjoyed a week earlier against the Green Wave.

Pulley’s second-quarter touchdown – his fourth in the last two games – was set up by a Michael Mankake interception. 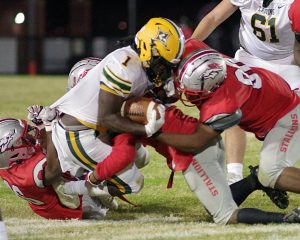 The Raiders (6-4) added a pair of second-half touchdowns, but the game was all-but decided when Tye Roberson scored on a 10-yard run with three minutes left in the third quarter. Roberson finished with a team-high 73 yards on 14 carries.

Senior wideout and Vanderbilt commit Jayden McGowan caught a Rawl pass from 10 yards out for a score with 3:17 to play in his final high school game. McGowan led the Raiders with 11 catches for 94 yards.

The Stallions will travel to Region 2-4A champion Greenwood next Friday in the third round of the playoffs. Greenwood defeated Catawba Ridge to advance.