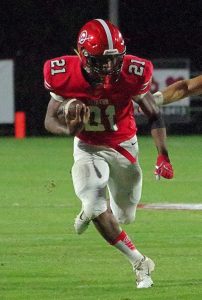 HOPKINS – Justin Copeland caught a touchdown pass on a fake punt with 4 minutes, 21 seconds left as Clinton broke open a tie game for a 48-34 Class 3A playoff victory Friday night at Lower Richland.

With the game tied at 34-34, Copeland caught the pass on fourth-down and 2 yards to go from Davis Wilson for what proved to be the game-winning score with 4:21 to play. Jishun Copeland added a 51-yard run with 1:58 left in the game to salt the game away.

The Red Devils advance to the state quarterfinals with the win and will travel to defending Class 3A champion Daniel next Friday. Daniel defeated Woodruff, while Chester upset Region 3-A champion Chapman to leave Clinton as the last team from Region 3 alive in the playoffs.

Clinton trailed 27-20 at the half and had trailed by two touchdowns twice in the second quarter, but Jishun Copeland scored the first of his three touchdowns on the night on a 4-yard run with 15 seconds left in the first half to cut into what had been a Lower Richland 27-13 lead. He added a 9-yard scoring run with 9:15 left in the third quarter to tie the game at 27-27.

But the fourth quarter belonged to Clinton as the Red Devils defense held Lower Richland scoreless in the final period.

Lower Richland’s Jermey Barney turned in a game-high 190 yards with two touchdowns, but Barney was ultimately no match for Clinton’s 1-2 punch of Copeland and James, who combined for seven touchdowns and over 250 rushing yards.

The Red Devils ran for 311 yards and rolled up 480 yards in total offense.

Zay Johnson had a pair of interceptions, and Austin Copeland recorded one.