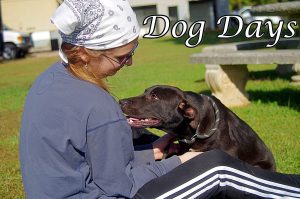 The black puppy with no name and white paws like little socks was terrified, frozen close to the ground at the Laurens County Animal Shelter as two Laurens District High students stroke her gently, giving the pup a loving touch it perhaps had never experienced before.

That’s part of a normal Friday for students in Melanie Birchmore’s veterinary science class at LDHS, who visit the regularly full shelter each week to help its staff exercise the dogs and give them a break from their kennels.

But it’s about more than dog walking for Birchmore and her students.

Not every student in Birchmore’s class will become a veterinarian or go into an associated line of work, though some will. Even so, the lessons learned on the weekly off-campus trips to the shelter are universal, Birchmore said.

“The skills, the understanding and the compassion that the kids learn dealing with the dogs, I don’t think they can get anywhere else,” she said.

Senior April Motes is there every Friday with the class. During Spirit Week, she arrived dressed as the rapper “Snoop Dog,” and then as a little old lady. Without the class on a recent Thursday, she came as herself. 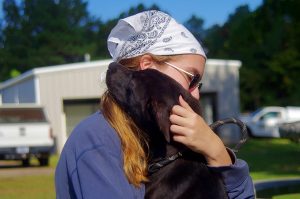 Regardless of garb, she arrived to the shelter on her own time and with the class. She plans on becoming a veterinary technician after high school.

Motes and fellow-senior Callie Wzorek worked together with their classmates to get dogs a little time in the grass and sunshine.

“It’s dogs, and it doesn’t get much better than that,” Motes said.

“It makes you feel good about yourself,” Wzorek said.

A black Labrador mix named Mallie is among Motes’ favorites at the shelter. She marvels that the young dog, which throws her paws around Motes’ neck before posing for photos, has yet to be adopted.

Some students said they believe by helping to socialize the dogs, they’re helping them have a better chance at adoption, and that’s the end game.

“We get them accustomed to people, and it’s really good for them,” said Jadyn Abrams.

Khloey Moore said she wants to help the dogs find homes, even if they can’t go to hers. 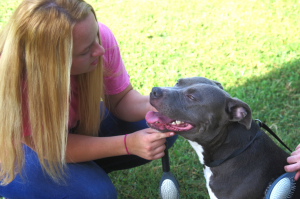 Jaydin Abrams, a student in LDHS’s veterinary sciences class, helps with a dog at the Laurens County Animal Shelter.

“There are a couple of them here that I want to take home but I can’t,” she shrugged. “It’s sad because they’re lovable and adorable.”

With the shelter routinely short on staff, Birchmore said what the members of her classes do at the shelter is beneficial for both.

“What these 10 kids do, (the shelter staff) just doesn’t have time to do during this hour that we’re out here,” she said.

Birchmore oversees volunteer visits to the shelter by the LDHS vet science class as well those from a special needs classes she teaches at nearby Evergreen Skills and Knowledge.

“If just one of these kids goes back in the community and says, ‘Hey, this is the way animal should be treated,’ maybe that’s one less or 10 less animals we see in the condition some of these are in.”