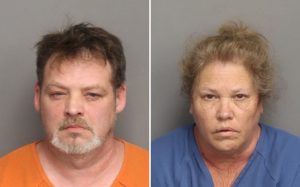 According to a release from the LCSO Wednesday afternoon, Laurens County Animal Control deputies responded to reports of multiple dogs in poor condition located at a residence on Millrock Church Road in Hickory Tavern.

Prior to entering the residence, deputies notice a “terrible odor” and several dogs could be heard barking. Inside, they found the home in disarray with animal feces and urine covering the floor throughout. 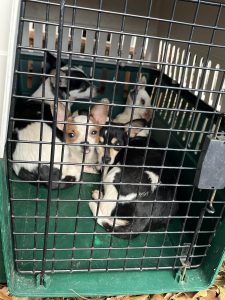 A few of the dogs seized at two residences Tuesday morning in Laurens County. More than 85 dogs were seized and two people were charged with multiple counts of animal cruelty.

Outfitted with protective suits and respirator masks, the deputies entered the home and found more than 48 dogs of various ages in the living area. Some were hiding inside furniture, walls and cabinets.

During the investigation, deputies also discovered the that the owners of the Millrock property also owned another home at View Point Court in Laurens. LCAC staff went there and discovered another 20 dogs inside that residence living in similar conditions.

“The men and women who battle animal cruelty are dedicated professionals. The despicable conditions they endure to rescue these poor animals out of such filth is beyond understanding or explanation,” said Laurens County Sheriff Don Reynolds. “They are warriors for these defenseless animals and I have humble admiration for them. If not for Anderson PAWS and the Charleston Animal Society, we couldn’t have assisted these animals at the level necessary to take them out of such terrible conditions.”

Anderson PAWS and the Charleston Animal Society provided assistance to LCAC deputies. Over 85 dogs were transported to Anderson County to be evaluated and receive medical care.