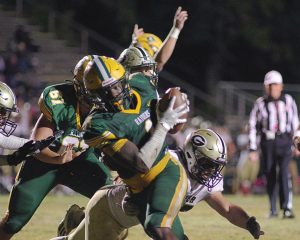 Laurens RB Zy Todd (1) scores a fourth-quarter touchdown – his fourth TD of the game – Friday night during the Raiders’ 49-35 win over Greer at K.C. Hanna Stadium.

Junior quarterback James Rawl threw for three touchdowns and senior running back Zy Todd ran for three to lead to Laurens to a 49-35 win over Greer Friday night at K.C. Hanna Stadium.

With the win, the Raiders (5-4 overall, 2-0 Region 2-4A) secured the No. 3 seed from Region 2 in the Class 4A state playoffs. Greer will be the No. 4 seed, while Greenwood claimed the region championship ahead of second-place Greenville.

LDHS is expected to travel to Easley, the runner-up from Region 1-4A, for the opening round of the playoffs next Friday.

Against Greer, the Raiders started out fast with a 55-yard kickoff return by Cayson Elledge to begin the game, setting up 25-yard touchdown pass from Rawl to Todd.

That score was LDHS’s opening salvo as the Raiders built a 28-7 lead by halftime. LDHS led 35-14 through three quarters before Green scored three fourth-quarter touchdowns to cut into the Raiders’ commanding lead.

Israel Rhodes scored a pair of rushing touchdowns for the Yellow Jackets in the final period, scoring on runs of 53 and 24 yards en route to a game-high 187 yards on the ground.

Todd and Tye Roberson both turned in 100-yard rushing performances for LDHS. Roberson led the way with 107 yards on 17 carries, and Todd turned in 105 yards on 15 attempts. Roberson also caught a 32-yard touchdown pass from Rawl, who completed 15 of 20 passes for 208 yards.

One of the few things that went wrong for the Raiders’ was Greer’s fourth-quarter scoring flurry. Had the Raiders held Greer under 24 points, LDHS would have captured the No. 2 seed in the playoffs from Region 2-4A. Instead, Greenville won the tie-breaker by holding Eastside to seven points Friday night.