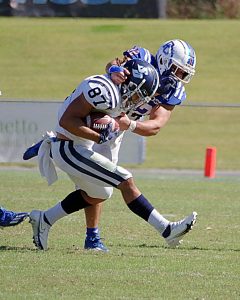 Blue Hose LB Jarrett Nagy (32) brings down San Diego WR Vance Jefferson (87) after a catch during the second half Saturday. Nagy suffered a dislocated elbow on the play and is expected to miss at least PC’s upcoming game against Stetson.

The Toreros opened the game with 23 straight points en route to a 69-28 win over the Blue Hose. After opening the season with four straight losses, San Diego (4-4 overall, 3-1 Pioneer Football League) has now won four straight.

PC cut a 35-14 San Diego halftime lead to 35-21 on a 58-yard pass from Ren Hefley to Lawson Bachelder in the opening minutes of the third quarter.

But the Toreros reeled off the game’s next 27 points, including a 4-yard punt return with 7:10 left in the third quarter when Hefley attempted a quick kick for one of the few times under first-year head coach Kevin Kelley, hitting the upback.

San Diego starting quarterback Mason Randall completed 24 of 29 passes for 242 yards and three touchdowns, while Smith ran for a game-high 82 yards and his two scores.

Hefley completed 31 of 43 passes for 390 yards and four touchdowns to four different PC receivers. Freshman wideout Jalyn Witcher continued his record-setting first season with nine catches for a career-best 192 yards and his 10th touchdown of the season, becoming the first Blue Hose player to record 10 touchdown catches during the program’s Division I era.

The Blue Hose (2-5, 0-4) return to Bailey Memorial Stadium Saturday for a 1 p.m. kickoff against Stetson.