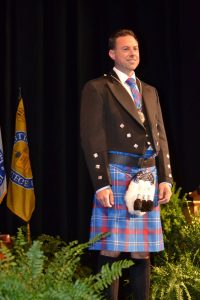 Clinton, South Carolina – Leading up to Friday morning’s inauguration of Dr. Matt vandenBerg as the 19th president of Presbyterian College, he has repeatedly clarified that in his view an inauguration is not about a particular person as president, but rather it’s about the college’s shared past, it’s present and, in the case of PC, a challenge to head toward the college’s future with “a championship spirit.”

While the inauguration held the pomp and ceremony expected for a college president and the classic sounds of bagpipes by Pipe Major Gary Hipp, vandenBerg also showed the spirit of support for his new college and mascot when he exited after a brief interchange with student Kennedy Wright and returned wearing a blue tartan kilt. 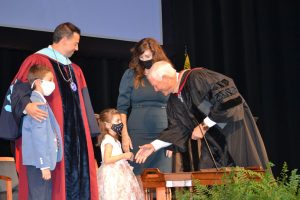 The week has included several announcements about significant philanthropic gifts to the college, as well as partnerships with the cities of Laurens and Clinton and endeavors which will bring a positive economic impact to both the cities. 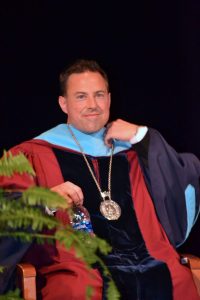 In addition to a service entrepreneurial scholarship opportunity for high school seniors in the state, announcements have included the renovation of the former PC Bookstore at 112 Musgrove into a social hub for college students, and the purchase  and renovation of The Capitol Theater in Laurens. It will then be used for movies, musical and theatrical performances and, in space shared by PC and school districts 55 and 56, competitive E-sports which can result in college scholarships for high school students.

Numerous gifts were announced as well– nearly $10.3 million – which surpassed PC’s record for philanthropic support in a single fiscal year.

See more in the Wednesday, Oct., 27 issue of The Laurens County Advertiser.