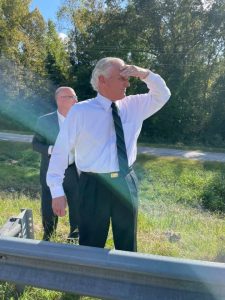 Gov. Henry McMaster stopped on I-385 last week to help corral a cow.

Casey McCarty wasn’t completely surprised when a motorist stopped on I-385 to lend him a hand — it’s South Carolina after all, and that’s what folks do.

Who it was, well, that was a bit of a shocker.

McCarty, who works at Laurens Livestock just off of I-385 at Highway 49 was attempting to corral an 800-pound longhorn cow that had escaped from the stockyard and was making her way down I-385 when Gov. Henry McMaster and three members of his security detail pulled up in a government-issue black Tahoe and asked if they could help out.

“When he got out of the Tahoe, I took a second look and said, ‘Oh, my goodness, it’s Gov. McMaster,'” McCarty said. “I told him that he didn’t need to be out there on the road like that, and he said he’d be fine. He just wanted to help get the cow safe.”

McCarty shared the experience on Facebook later that day.

McMaster was on his way back to Columbia from an appearance at a Piedmont-based medical device facility.

McCarty, who lives in Prosperity, had been driving slowly toward Clinton on I-385, keeping his truck and trailer between the red and white Longhorn and the interstate as it rambled toward Clinton when the black Tahoe appeared and its occupants offered their assistance.

“(The cow) took off and started heading down the on ramp — and that’s never good,” he said.

Yes, McCarty was trying to keep the cow from becoming Steak tartare on the interstate, but also attempting to keep what could easily have been a tragic accident from happening.

A vehicle traveling at 70 m.p.h. or faster colliding with a large longhorn could be disastrous for all involved.

“It was a situation that could’ve gotten serious. An 800-pound cow could do some serious damage,” said McCarty, who eventually got the bovine herded onto an adjacent frontage road.

“The best thing about it was the cow was gentle. If she had been crazy it could’ve been a bad experience.”