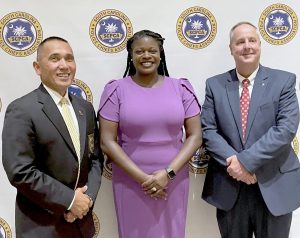 Latimore said the SCPCA works for the preparation and training of every police department in the state, and having two executive committee officers from smaller cities in the same county provides a unique perspective.

“In Laurens, community relations may not be the same as in larger cities. We are different and we have different struggles from the large cities,” Latimore said. “The executive committee comes up with the training, and so having two people from small towns does give us an advantage and the ability for smaller cities to allow their perspectives to be heard.”

Following the deaths of George Floyd and Breonna Taylor, the SCPCA began working proactively with community partners which could assist them in training, Latimore said.

“These agencies come and train on best practices for a variety of situations, but especially training in law enforcement as it relates to community relationships,” Latimore said. “This is something we are doing state wide, and after every training those officers take that back to their respective agencies.”

The professional organization also is expanding its efforts toward recruitment, as well as advocating for legislation which could help agencies across the state which are struggling with a lack of officers.

Latimore said she feels well-prepared for her role, especially  with regard to serving the community and serving her officers, pointing with thanks to her own former chiefs, Robin Morse and Sonny Ledda. Ledda, at Latimore’s request, gave the oath of office.

First published on Page 1 of the Wednesday, Oct. 13 issue of The Laurens County Advertiser.