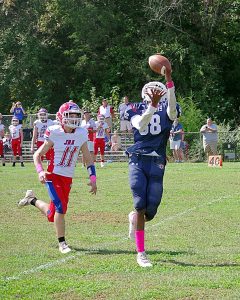 Laurens Academy TE Diamonte Grant catches a Garrett Murphy pass and takes it in for a touchdown Saturday in a 66-30 LA win over Jefferson Davis Academy.

The seventh time was the charm for Laurens Academy.

The game had been postponed from Friday night due to rainy conditions, but LA had waited an agonizing seven weeks to pick up a victory, but didn’t have to wait any longer, scoring 22 unanswered points to start the game and jumping out to a commanding 50-16 lead by halftime.

“We needed a win,” said LA head coach Todd Kirk. “We had to move it to Saturday, and that worried me a little bit at first, but it seemed to give us some energy. It got a little hot out there, but we were able to fight through it.”

Freshman quarterback Garrett Murphy threw six touchdown passes and ran for two others. Two of his touchdown passes went to senior Diamonte Grant, who earned Laurens Touchdown Club Player of the Week honors for his performance.

Junior running back Clarence Bertoli, who made his season debut for LA (1-6) after offseason knee surgery, scored form 49, 43 and 48 yards out on three shovel passes from Murphy.

Kirk said Bertoli’s return added a dimension to both the Crusaders’ offense and special teams. Bertoli is also LA’s kicker and allowed the Crusaders to kick the ball deep on kickoffs as opposed to squib and onside kicks that give up field position. 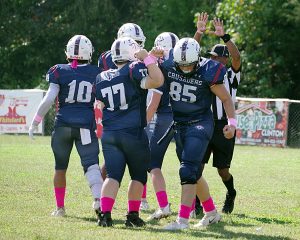 Grant connected with Murphy on scoring strikes of 48 and 24 yards. Cal Robertson also scored on a 90-yard reception from Murphy.

Jarrett Willard added a defensive score for the Crusaders on a fumble returned 51 yards for a touchdown.

Kirk said getting the homecoming victory was satisfying after his team took its lumps through the first six weeks of the season.

“They’ve hung in there, and they’ve not quit,” he said of his players. “They’ve played harder every ballgame.”
Jefferson Davis fell to 2-3 on the season.

Grant named Player of the Week

Senior tight end/defensive end Diamonte Grant earned Player of the Week honors from the Laurens County Touchdown Club for his performance against Jefferson Davis. Grant had four catches for 127 yards, including two touchdowns. On defense, he had five tackles, one tackle for loss and a forced fumble.
Grant, one of two seniors of the LA roster, will be honored at the Oct. 21 meeting of the Touchdown Club.