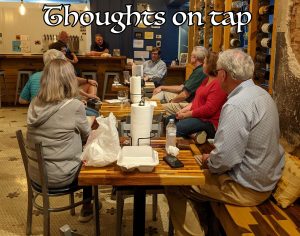 So, do all dogs go to heaven?

Does God really care who wins a football game?

Maybe there are no real answers, but those and many more questions remain, and Mike McCracken, pastor at Laurens First Presbyterian Church felt there was need for discussion.

And that was the beginning of Taproom Theology, a monthly open discussion to anyone who wants to join at Palmetto Brothers Dispensary in downtown Laurens.

“One of the things that we really value in the Presbyterian church is the idea that there’s room enough to question,” McCracken said. “Be faithful to your tradition, be faithful to God, but you can stand and ask a hard question and then maybe sit in the interim while you wait for an answer, knowing that it may take a lifetime for the answer to show itself to you.”

It is also a way for McCracken to reach out beyond his pulpit and beyond his congregation to speak to and hear from other people. Daniel Eplee, pastor at Laurens United Methodist Church, held two similar weekday morning discussions at the Coffee Roost over the summer and has plans for more in the future.

“It’s not a presentation at all. It’s not a sermon,” Eplee said. “It’s just a hey, if you have questions about who God is or maybe you don’t have a thought on God at all, it’s a safe place and a judgement-free zone to do that.”

The idea of Taproom Theology – whether called that or not – is not original to McCracken, Presbyterians or Laurens.

Pubs – historically referred to as Public Houses – have long been the center of communities in Europe and in the U.S. for political and other important discussions. They have often been places where people gather outside the church walls to consider important issues, McCracken said.

“It’s different,” he said. “It’s not a Sunday School class. “There’s room for folks that have a completely different view, and we sort of hope for that.”

McCracken welcomed 29 people to his first Taproom Theology meeting in July. The topic was, indeed, whether dogs got to heaven. 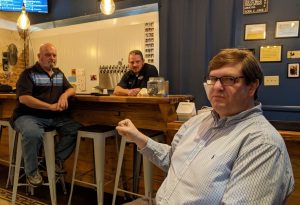 In September, a more serious note on the chasm created among Americans in a polarized political world was discussed.

“Why can’t we talk to one another anymore?” That was the basic premise of the discussion, and there were examples of estranged family members, lifelong friends and old college roommates who are now distanced from one another by opposing political views.

“Why have we lost the capacity to talk about issues with each other and walk away with respect and friendship?” McCracken asked. “What’s the answer? Do we just try and only talk to people that we enjoy being around or who we share the same political and religious views with?”

About 10 people took part in the September discussion, all of them from McCracken’s congregation.

McCracken admitted it was the deepest discussion of his pub meetings thus far. October’s discussion will be about the possibilities of ghosts, leading into Halloween – at once a lighter and darker topic.

Mary Fortune, a member at First Presbyterian, said the discussions have opened up her mind to other points of view.

“We’ve talked about things that I haven’t thought about,” Fortune said. “It certainly opened up my thinking on things. I came in thinking I had an immediate answer, but after hearing things here for a little while, my answer wasn’t as steadfast or it opened my eyes to different perspectives on things.”

McCracken brought in a non-alcoholic drink and said he knows there is some standing criticism of the idea of theological discussions with a pub as the setting.

“Jesus teaches us that we should be in fellowship everywhere,” he said. “Our faith calls us not to say, ‘OK, I go to church on Sunday and God’s in his brick house that I live on Main Street, and then I go and do my own thing Monday through Saturday. . . . God calls us to be God’s people wherever we go.”

And for the critics?