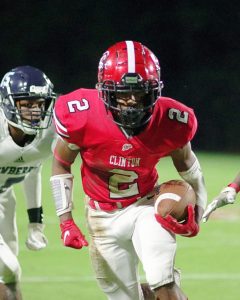 Clinton safety Justin Copeland (2) had two interceptions Friday at Broome, including one returned for a TD. (file photo)

CHS intercepted highly touted Broome quarterback Dylan Ramirez four times, including one that Justin Copeland returned for a second-half touchdown as the Red Devils built on a 27-14 third-quarter lead. Copeland intercepted Ramirez twice on the night. Ramirez was limited to 238 yards on 16 of 38 passing.

Jishun Copeland ran 11 times for 105 yards and a touchdowns, while Robinson added 65 yards on the ground with rushing and receiving touchdowns. Robinson, who scored for the second straight game, was filling in for Bryson James in the starting lineup. James, a running back and linebacker, was recovering from an ankle injury.

The Centurions recovered an onside kick to start the second half and drove in for a touchdown, cutting Clinton’s halftime lead to 27-14. Broome got no closer.

The Red Devils went 8 of 9 on third-down attempts and rolled up 352 yards on the ground on a field drenched by heavy rains Thursday and Friday.