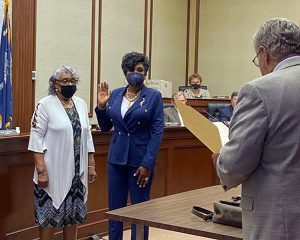 One week after winning a Special Election for the District 3 seat on Laurens County Council, Shirley Clark was sworn into office.

Clark’s installation was the first order of business for council Tuesday evening at its regular meeting.

It is the first time a full seven-member council has met since the resignation of former District 3 representative Garrett McDaniel in late March. McDaniel resigned to accept a post in the administration of President Joe Biden.

In other action Tuesday night, council was expected to approve funding for the first phase of renovations to the former Winn Dixie building on Hillcrest Drive.

The plan presented by Greenville-based architects Thomas & Hutton. Council was asked to approve a $1,454,963 expenditure for the initial phase of renovations. The expenditure would come from the county’s contingency funds or state American Rescue Plan Act funds.

A plan for the county’s role in the celebration of the 250th anniversary of the American Revolution was outlined in detailed by local historian and commission member Dianne Culbertson.

“We know that a robust and extensive program in Laurens County will result in many visitors and tourists coming into our county to learn about and experience our extensive history,” Culbertson wrote in a memo to council members.

At council’s last meeting, Council Chairman Brown Patterson asked Culbertson and members of the commission to go into greater detail on any forthcoming funding requests.