FacebookEmail
| logout
Clinton, S.C. –  A bell tolled 15 times last week, once for each of the 15 African American members of First Presbyterian Church in Clinton who passed away and were buried in the Clinton cemetery from the mid- to-late 1800s. 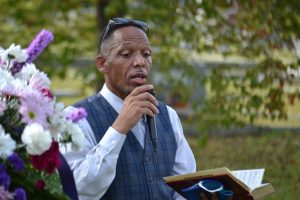 WADE IN THE WATER – Little River Baptist Church of Ware Shoals Pastor, Rev. Sylvester Grant, sings the old spiritual, Wade in the Water, as part of a committal service for the African members buried in the First Presbyterian Cemetery in Clinton. Photo by Judith Brown

The dates are unclear for most of them, but what is known is that they were members of First Presbyterian. For each person, a large hand bell was tolled as First Presbyterian Pastor Dr. Jeri Perkins read the names of each of those who known to have died between 1855 to 1869 at a committal service when the church presented a new memorial momument.

“And we commend our brothers and sisters whose names and number we do not know but are written in the Book of Life and known to God and the company of Heaven,” Perkins said, and the bell rang again. 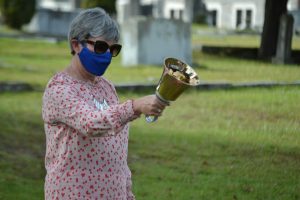 COMMITTAL – A bell tolled for each of the 15 names read during a committal service in Clinton. Photo by Judith Brown

Last weekend’s’s committal service was the culmination of more than a year’s worth of work after members of First Presbyterian discovered, through the addition of new fencing, that a small marker at the side of the cemetery noted the spot where African church members had been buried generations ago.

The wording of the small plaque was outdated and lacked the respect and compassion that members of the church felt was appropriate. When they began to work on an updated monument, the task force began to wonder if names of some of those buried could be found.

“We could not find the session minutes from that era,” said LeighAnn Bryant, the chair of FPC’s Racial Equity Task Force. “So Jeri Perkins contacted the historical societies, and finally the archivist at Columbia Seminary in Decatur found names on microfiche and emailed them.”

Before the cemetery was handed over to First Presbyterian, it had for many years been the only one available for the Village of Clinton, Perkins said, so it’s likely that many buried there were not connected to the church at all. 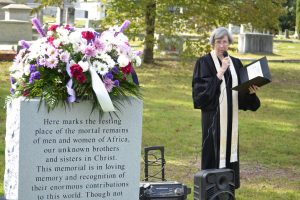 The task force realized that, sadly, there’s no way to find the names of those many individuals. Some were enslaved at the time of their death, and others died after the Civil War had come to an end.

Eventually, the committee sought counsel from numerous leaders in the African American community from Clinton to ensure that the wording would carry the desired respect, and placed it in that same area of the cemetery near South Adair Street. Churches across The Laurens County community were invited and participated in the ceremony.

The wording of the new marker reads as follows: “Here marks the resting place of the mortal remains of men and women of Africa, our unknown brothers and sisters in Christ. This memorial is in loving memory and recognition of their enormous contributions to this world. Though not liberated in this life, they are now truly free and in the loving arms of our Father in heaven.”

This article was first published in the Wednesday, Sept. 22 issue of The Laurens County Advertiser