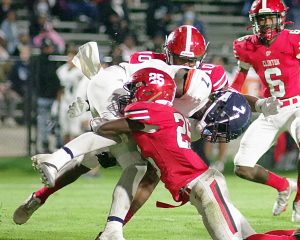 Newberry put Clinton in an unfamiliar position with an early Bulldogs lead, but the Red Devils rallied in a big way Friday night at Wilder Stadium.

Clinton, ranked No. 3 in Class 3A, had not trailed in a game this season and stormed back after trailing the Bulldogs by a touchdown with five unanswered touchdowns of their own en route to a 41-20 victory.

The Red Devils got the go-ahead score with 35 seconds left in the first half when Davis Wilson tossed a 3-yard touchdown pass to Bryson James to put Clinton ahead 20-14.

It was the first of two big special teams recoveries for the Red Devils, who got the ball back to start the second half and drove 75 yards on five plays with most of that coming on Jishun Copeland’s 56-yard touchdown run. Jishun Copeland added an 11-yard scoring run, which was set up by a fumbled kickoff return by Newberry at the Bulldogs 22-yard line, to give the Red Devils a 34-13 lead with 8:40 left in the third quarter.

Jishun Copleand finished with 95 yards on 12 carries and two touchdowns, and two-time all-state performer Jykorie Gary led all rushers with 147 yards on 10 carries with two touchdowns (14 yards, 10 yards) and had one long touchdown run negated due to a holding call. Justin Copeland led all receivers with 104 yards on three catches.

Clinton quarterback Davis Wilson, who completed 6 of 9 passes for 74 yards, said they were ready for anything against a physical Newberry team (1-3).

“Our coaches prepared us for all of it,” Wilson said. “We just fought for the game and came out with the win.”