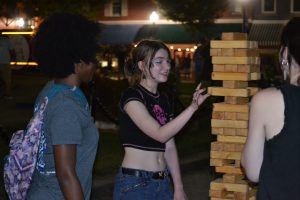 ‘The beginning of a beautiful friendship?’

About 100 Presbyterian College found their way by car or by trolley Friday night to downtown Laurens.

The welcome-back-to-school event was put on in collaboration between PC and the City of Laurens as a way to expose the students to their neighboring city.

“I thought it was a smashing success,” said PC President Matt vandenBerg, who is in his first year at the college. “I’m not aware of anything like that we’ve done in the past together, so a lot of credit goes to (Laurens Mayor Nathan Senn). I think it’s a great way to engage our students, our faculty and our staff. It’s a great start and hopefully a harbinger of good things to come.”

The City of Laurens trolley started making round trips from the PC campus to Laurens and back around 5:30 p.m. and made its last trip at 11 p.m. Other students made the 15-minute drive on their own.

The City of Clinton also hosted its annual welcome-back event in late August as classes got under way at PC.

“If you’re a young student it can be difficult to get plugged into the community outside of campus,” Senn said. “This is about making sure those students build those connections. In the long game, yes, we’re hoping people spend more time here. It benefits PC, and it benefits the county as a whole if these kids have a positive college experience.”

“I hope it grows,” he said. “The students who did come out seemed to appreciate it.”

Irick also said some students told him that they had friends who chose not to come because “they thought Laurens was far away.”

To him, that illustrated the value of having the event.

“That’s part of the reason behind this,” Irick said. “We want to let them know that Laurens is here.”

But such events in Laurens and Clinton involving PC go deeper than one-night social events.

“I think what you’re seeing is the early evidence that we are already and good things are coming from that,” vandenBerg said. “We’ll be making announcements in the future that are exciting and the result of both Laurens, Clinton and PC trying to do things together for our mutual benefit.”

vandenBerg said that involves using the expertise of the PC faculty and staff in the broader community, education outreach and broader access to PC’s fine arts programs for the whole community.

“A lot of people believe rightly that we need to build partnerships and focus on doing things together to strengthen the entire region,” he said. I think that’s starting to happen now because of our leadership.

“Small colleges across the country are developing that mindset. One of the points being made is that it’s no longer a good recipe for success for a college to stick its head in the sand and hope things get better.”