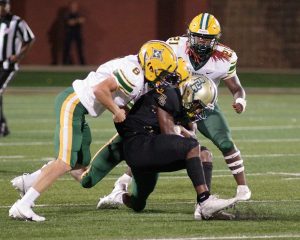 LEXINGTON – A game-tying fourth-quarter drive coupled with a Laurens goal-line stand inside the Laurens 1-yard-line went for naught Friday night as host River Bluff outlasted the Raiders 21-14 in triple overtime.

For Laurens (1-3) the Gators became the latest to snatch victory from the jaws of defeat this season. The Raiders suffered a pair of fourth-quarter losses to T.L. Hanna and Clinton, failing to cash in on fourth-quarter drives against both teams.

The same happened at River Bluff.

The Gators (2-2) spent the majority of the final three quarters clinging to the lead after Gray Herring’s short touchdown run with 4:35 left in the second quarter gave River Bluff a 7-0 advantage.

Laurens finally put together a scoring drive following nearly four quarters of erratic offense with less than two minutes of the game.

After forcing a Gators punt, Laurens quarterback James Rawl connected with Pe’rel Shands on a 54-yard pass that ended at the River Bluff 9. On the next play, Rawl went up the middle on a quarterback draw for a touchdown and a 7-7 tie with 1:40 to play.

But the Raiders weren’t quite done in regulation, forcing another River Bluff punt and taking over at their own 49 with 1:10 to go. Following completions to Shands and Jayden McGowan, a run by Rawl to the River Bluff 18 set up a Roberto Luna field-goal attempt with 9 seconds to play.

That was one of several missed opportunities for the Raiders, who suffered through several costly penalties, drawing 13 flags for 95 yards. A personal foul call against receiver Mike Mankake negated a 60-yard run by Tye Roberson that ended inside the River Bluff 10.

What appeared to be a Gators fumble on a screen pass that Jackson Martin scooped up and took untouched to the end zone was ruled an incomplete pass. 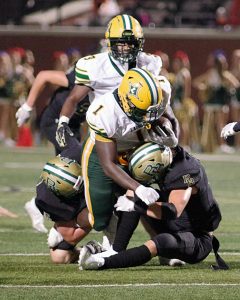 “We had our opportunities,” said Laurens head coach Daryl Smith. “We just need to make sure we capitalize on them next time.

The Raiders defense came up with another stop in the first overtime with a Gemire Darden interception. On the ensuing possession, Laurens’ Zy Todd went around the right side on second down to the River Bluff 3. On third down, Todd went around right end again, but fumbled as he pushed for goal line, and the Gators recovered to force a second overtime.

In the second overtime, Darden scored on a 10-yard run to give the Raiders a 14-7 lead. The Laurens defense forced a fourth-down on the Gators’ ensuing possession, but quarterback Hunter Sheppard found Apollo Cook in the end zone for another game-tying score.

River Bluff had the first possession for the third overtime, and Sheppard connected with Thomas Powell for a 21-14 lead. The Gators then intercepted Rawl in the end zone to end the game.

The Raiders ran for 204 yards with Rawl leading the way with 62 yards while completing 6 of 18 passes for 95 yards and three interceptions.

Laurens returns to K.C. Hanna Stadium next Friday (Sept. 24) where they will host North Augusta.