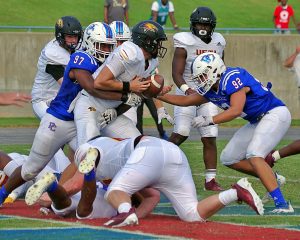 National Christian Collegiate Athletic Association (NCCAA) member Fort Lauderdale, which was forced to cancel its first two scheduled games this season due to COVID-19 outbreaks within the program, arrived in Clinton with just 35 players. The Eagles were shorthanded due to COVID-19 quarantines, but were at a numbers disadvantage against PC, which played all 100 players who were in uniform Saturday afternoon after jumping out to a comfortable early lead.

The Blue Hose jumped out to a 22-0 lead in the first quarter before Fort Lauderdale’s Hector Molero connected on a 29-yard field goal with 2 minutes, 10 seconds left in the opening quarter. With that kick, Molero became the leading and only scorer in Fort Lauderdale program history. 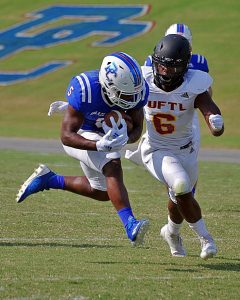 “We had a lot of guys that got a lot of reps and a lot of developmental time in there,” said PC head coach Kevin Kelley. “But early in the game, depth on our part was really a factor.”

PC starting quarterback Ren Hefley, who threw for an NCAA Football Championship Subdivision record 10 touchdowns in last week’s 84-43 win over St. Andrews, passed for a relatively modest 309 yards and four touchdowns, connecting on 22 of 35 pass attempts with two red-zone interceptions that came in the end zone.

Hefley was among four PC quarterbacks to take snaps. The other three – Tyler Huff (7-for-7), Gabe Carroll (2-for-2) and Warner Bush (2-for-2) – completed all 11 of their combined pass attempts. Two of Huff’s completions went for touchdowns to Matthew Rivera and Chase Tinsley.

While seven different Blue Hose offensive players scored touchdowns on the day, the PC defense added a pair of safeties and a PC Division I record-breaking 98-yard interception return by defensive back Jayden Martin that gave PC a 47-3 lead with 6:37 left in the third quarter. Martin’s pick-six was one of four PC interceptions.

With the win, PC starts the season 2-0 for the first time in its NCAA Division I era and first time since 2005 under then head coach Tommy Spangler, who was in his first stint at the helm of the Blue Hose. PC went on to win the NCAA Division II South Atlantic Conference title.

The Blue Hose is scheduled to play its first game away from Bailey Memorial Stadium this season on Saturday (Sept. 18) when they visit Campbell. Kickoff is set for 6 p.m. in Buies Creek, North Carolina.