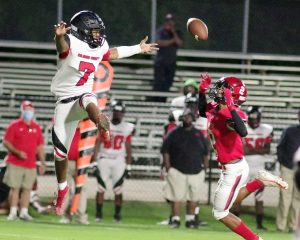 Clinton safety Justin Copeland (2) breaks up a Calhoun County pass as the Saints’ Justin Bull (7) tries to make the reception.

Last-minute schedule changes brought about by COVID-19 led to a Friday night trip for Calhoun County to Wilder Stadium.

After a 51-0 victory by host Clinton, the visiting Saints may regret not taking advantage of the COVID-caused bye week.

The Red Devils proved to be as dominant as the lopsided score would indicate. The Clinton defense held the Saints to 56 yards of total offense while seven different Red Devils scored touchdowns.

Clinton rolled up 406 yards of total offense with 316 yards of that total coming from a balanced rushing attack. Senior Jykorie Gary turned in a game-high 83 yards rushing on nine carries with a touchdown for Clinton.

Clinton led 35-0 by half time and added a safety for a 37-0 lead on the second-half kickoff.

Officials kept the clock running throughout the fourth quarter with the game well out of reach for Class 2A Calhoun County (1-2).

The Red Devils (3-0) remained unbeaten on the season with a homecoming matchup with Blue Ridge scheduled for 7:30 p.m. next Friday (Sept. 17) at Wilder Stadium.