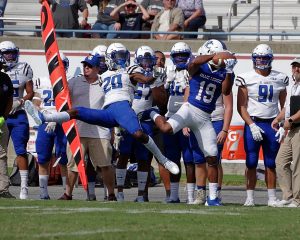 PC quarterback Ren Hefley, a former Michigan walk-on who won the starting job from incumbent starter Tyler Huff this preseason, threw for 10 touchdowns, including a national Division I record-tying seven in the first half. Three of Hefley’s first-half touchdown went to freshman wideout Jalyn Witcher, which also tied an NCAA Division I record.

Witcher, who played for Kelley at Pulaski (Arkansas) Academy, finished with five catches for a game-high 156 yards. Hefley, who played in Kelley’s developmental system before transferring to Bryant High School where he won a state title, competed 38 of 50 passes for 538 yards. The Blue Hose rolled up 814 yards of total offense.

“I’m glad we won,” Kelley said. “I’m glad (the players) got the reward of all those weeks of practice. . . . I’m glad to get something on film to show our guys in-game that we can fix that we can use to get better.”

Huff, who saw action in several two-quarterback sets and spelled Hefley in the second half, caught a touchdown pass from Hefley and threw for two touchdowns. Matthew Rivera had touchdown receptions of  8 (from Huff) and 49 (from Hefley) yards.

The Blue Hose (1-0) led 56-29 at halftime after the two teams combined for 42 first-quarter points and 43 in the second quarter.

The Knights’ run-heavy offense was unable to keep up with PC. They ran for 249 yards, averaging 4.4 yards per carry.

Fort Lauderdale is scheduled to visit Bailey Memorial Stadium next Saturday (Sept. 11) at 4 p.m. The Eagles have yet to play this season after being forced to cancel games against Southeastern on Aug. 28 and against Texas-Permian Basin Friday (Sept. 3) due to COVID-19 positive tests within the Fort Lauderdale program.