CrimeStoppers is offering up to a $1,000 reward for information identifying and leads to the arrest of a person involved in a hit-and-run incident on Monday, Aug. 23 in Gray Court.

According to the SCHP, the incident occurred around 7:45 a.m. on Monday, Aug. 23 on Georgia Road near Zacks Trail.

A vehicle traveling south on Georgia Road struck a pedestrian and left the scene.

The victim, Tony Nordquist, 62, suffered multiple injuries that required hospitalization and surgeries. He is recovering.

According to the SCHP, investigators are still looking for leads on the driver of the vehicle. They did recover what they believe to be small pieces from it at the site of the incident but those fragments are too small to help with a vehicle identification.

The vehicle could have damage to the left front fender and hood.

The SCHP is now looking into offering a reward through CrimeStoppers for information that leads to solving the case. Anyone with information is asked to call CrimeStoppers at 864-68-CRIME (682-7463) or the SCHP at 803-896-9621. 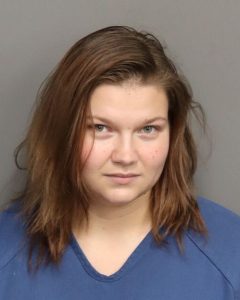 A Westminster woman has been charged with armed robbery following an alleged robbery attempt in January at the Handee Mart on Church Street in Laurens.

Amy Denise Fleming, 23, of Westminster was formally charged in Laurens Friday. She and an accomplice, Artis Wright, 30, were arrested on Feb. 4 in Lavonia, Georgia, following a string of armed robberies in the Carolinas and Georgia.

The pair was arrested after a high-speed chase began in Oconee County, South Carolina.

Fleming and Wright have been awaiting extradition to Laurens County from North Carolina and Georgia.

Fleming, who is charged with armed robbery and possession of a weapon during the commission of a violent crime, remained the Johnson Detention Center Tuesday afternoon. Her bond is set at $110,000.