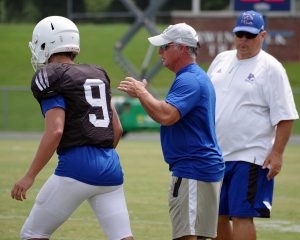 But it will mean something either way.

“If I don’t win this game as a head coach or if we don’t win this game as a team, it’s natural to start questioning things,” said Kelley, whose analytics-driven style of offensive football contributed to eight state titles at Arkansas’ Pulaski Academy. “(If we lose), I don’t think it’s the end of the world, but it makes my job a whole lot harder. It makes the job of our coaches and our team leaders a whole lot harder.

“So, it’s important to win this game. It’s very important for the guys to buy in completely.”

The Blue Hose, who are coming off a 4-3 spring campaign, begin their first season under Kelley at 4 p.m. Saturday against NAIA opponent St. Andrews at Bailey Memorial Stadium.

Kelley was hired after former PC head coach Tommy Spangler was dismissed immediately following the spring season – PC’s first winning season since 2014 ­– and brings with him his wide-open offense and unorthodox “never punt” scheme to the Blue Hose.

Any resemblance under Kelley to previous editions of PC football – at least offensively – don’t go far past the team’s uniform colors.

Former Michigan walk-on quarterback Ren Hefley has supplanted Tyler Huff, a second team all-Pioneer League performer this past spring – as PC’s starting quarterback. Hefley, who played at Pulaski Academy for Kelley, is a redshirt sophomore and ran the Wolverines’ scout teams while in Ann Arbor.

Huff, a junior, averaged 278.5 yards of total offense in six games with PC in the spring campaign.

“There’s no question that we’ve got two really good quarterbacks on this team,” Kelley said. “Ren had the advantage of knowing my offense. . . . If it had been the other way around, and Tyler had been running my offense for five years, I think he would’ve been the guy. It’s a lot to learn, and it’s a lot different than what Tyler had been used to.”

Kelley said Huff will have a significant role in the offense, even though Hefley is the starter. 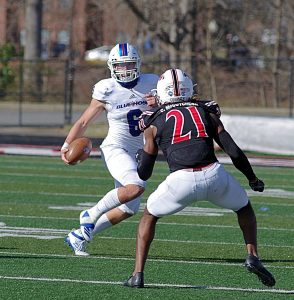 QB Tyler Huff in action this past spring against Gardner-Webb.

“Tyler is a heck of a football player,” Kelley said. “He can throw the ball; he can run the ball . . . and he can catch the ball. So, he’s going to have a big role, and that’s going to make us very difficult to defend if we can perfect some of the stuff that he’s going to be doing as well as what Ren brings.”

The Blue Hose also return leading rusher Delvecchio Powell II, who rushed for 311 yards. Linebacker Jarrett Nagy, who averaged 7.2 tackles per game in the spring, returns for his senior season to lead a defense that was anchored by All-American Colby Campbell at middle linebacker.

Pioneer League coaches picked PC to finish fifth this season in their preseason poll. No Blue Hose players were among those selected to the coaches’ preseason all-conference team.

With the exception of Nagy, Huff, Powell and offensive lineman Noah Mangum, the Blue Hose are have a dearth of college experience on both sides of the ball. Thirty-three new players arrived before the beginning of practices in August.

“We’ve thrown a lot at them mentally, and we do that on Mondays,” Kelley said after Monday’s practice. “I felt like that kind of set them back a little bit, and we didn’t do a good job as a coaching staff of getting them back up where they need to be, but that’s part of being young. We’re a very, very young team.”

Nagy and Laurens product Tyrese Moses, a 5-10, 200-pound linebacker, among only seven seniors on this year’s roster to go with Mangum and 10 other juniors. The rest are underclassmen.

PC will be eligible for the Pioneer Football League title for the first time after gradually moving to non-scholarship football over the past four years.

But it starts with St. Andrews.

The Knights are coming off a 3-3 season and also start 2021 with a new head coach in David Harper.

St. Andrews ranked No. 8 in NAIA Division I in total offense at 454.3 yards per game and No. 4 in rushing with 254.8 yards per game. Leading rusher Trevor McNeil, senior who accounted for 116.3 yards per contest while averaging 5.8 yards per carry, returns for the Knights as does starting quarterback Andrew Fowler, a transfer from NCAA Division II Tusculum.

PC easily handled St. Andrews 52-14 in the only previous meeting between the two programs in 2019, but the 6-foot 235-pound McNeil will provide an early test for the Blue Hose defensive front.

Kelley has put a premium on defenders swarming to the ball and winning the turnover battle.

“(Interceptions) win games; fumbles and turnovers win games,” Kelley said. “Big plays win games, and you stop big plays by getting more guys to the ball on the backside.”

PC Notes: Online production company Overtime Sports, which featured Kelley’s Pulaski Academy program on its YouTube channel, is doing the same at PC. A videographer has been at practices. The video will be edited and streamed on YouTube with the finished product being akin to HBO’s “Hard Knocks” series on NFL teams. . . . Kelley was named among Sports Illustrated’s Top 25 Most Intriguing College Football Coaches this past week. Kelley is ranked No. 11 behind Clemson’s Dabo Swinney (No. 10) and Alabama’s Nick Saban (No. 9). Texas’ Steve Sarkisian tops the list. . . . In addition to Moses, local products on this year’s Blue Hose roster include redshirt freshman DB Ryan Campbell (Laurens), freshman DB Nick Humphries (Laurens) and redshirt freshman DL Greg Sanders.