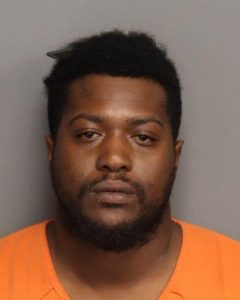 Travious Antwan Mims has been charged with possession with intent to distribute heroin and fentanyl, possession with intent to distribute cocaine (second offense), possession with intent to distribute MDMA or ecstasy (second offense) and possession of marijuana (second or subsequent offense).
While searching the residence, investigators discovered:
• Digital scales commonly used in the selling of illegal substances
• Numerous torn portions of plastic bags commonly associated with the selling of illegal substances
• Marijuana and Marijuana derivative
• One Firearm and ammunition
• Ecstasy
• Crack Cocaine
• Tablets containing an amount of Heroin and/or Fentanyl
• Over $40,000 in cash
“This is a result of vigilant and dedicated work to help combat the drug crisis in Laurens County,” said Laurens County Sheriff Don Reynolds. “I, along with the grateful citizens of Laurens County, thank these deputies.”
Posted in Breaking News, News