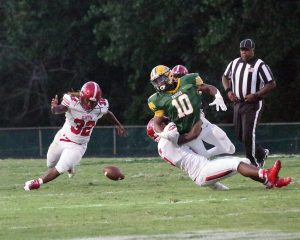 Laurens WR Jay Pulley (10) is separated from the ball after a catch. as Clinton’s Jermiahas Smith (32) looks for the fumble recovery.

The return of Laurens County’s high school football rivalry lived up to the billing Friday night with Clinton escaping K.C. Hanna Stadium with a 21-19 victory over Laurens.

The Red Devils (2-0) scored 14 first-half points off of a pair of Laurens turnovers. Clinton led most of the game, but was never able to completely shake the Raiders.

LDHS had a chance to take their second lead of the game, but kicker Brian Sheffield pushed a field-goal attempt wide right with 1 minute, 10 seconds to play.

The Raiders (0-2) lost their second-straight game after coming up short in the fourth quarter.

Cayson Elledge’s 93-yard kickoff return to start the second half cut the Clinton lead to 14-13 following a missed extra-point try.

Clinton responded with a methodical 14-play, 67-yard touchdown drive, using up 9:02 and pulling ahead 21-13 on a 4-yard touchdown pass from Davis Wilson to Zechariah Johnston – the Red Devils’ on pass attempt on the drive.

“We had to get back up and punch back,” Clinton head coach Corey Fountain said of his team’s response to Elledge’s kickoff return to start the second half. “Our guys did that, and I’m very proud of them.” 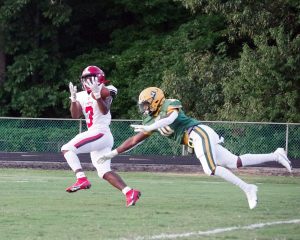 LDHS eventually answered Clinton’s score with an eight-play, 76-yard drive of its own, which was capped by a 35-yard touchdown pass from James Rawl to Zy Todd with 2:44 left in the game, but the 2-point conversion attempt that would have tied the score failed.

Todd’s touchdown reception was his second score of the night. His 3-yard first-quarter run gave LDHS a 7-6 lead following Robert Luna’s kick with 3:22 left in the opening period.

Wilson took the lead back with a 14-yard run for the Red Devils with 10:08 left in the second quarter. Jishun Copeland’s two-point conversion rush gave Clinton a 14-7 advantage.

The Raiders outgained Clinton 354-221 on the night, but were unable to consistently turn that yardage into points.