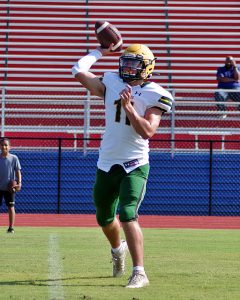 T.L. Hanna, ranked No. 4 in Class 5A, snuffed out an upset bid from visiting Laurens Friday night with a late fourth-quarter touchdown drive to escape with a 23-17 victory.

The Yellow Jackets (1-0) drove 80 yards in 10 plays, capping the game-winner drive with a Fletcher Cothran 9-yard touchdown run followed by a 2-point conversion.

After trailing 15-10 in the second half, the Raiders scored to take a 17-15 lead but missed a 32-yard field-goal attempt with just under seven minutes to play, setting up Hanna’s final drive.

LDHS took over and drove inside the Hanna 15-yard-line, but two James Rawl passes into the end zone in the game’s final seconds were incomplete.

Rawl threw for a pair of touchdowns – one each to Cayson Elledge and Jayden McGowan – and Roberto Luna hit a 28-yard field goal for the Raiders (0-1).

LDHS is set to return to action next week for its home opener against intra-county rival Clinton. The Red Devils (1-0) defeated Pendleton 48-24 Friday night at Wilder Stadium.