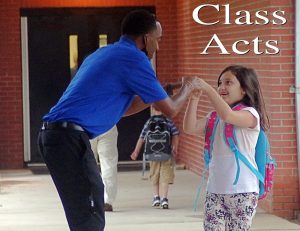 Tuesday morning at Ford Elementary, one little boy stood alone where two sidewalks joined, looking wide-eyed at two different pathways, not knowing which one to take.

Of course, they all led inside for the first day of school and staff and teachers helped him find his way to his classroom.

He was among around 9,000 students to return to classrooms in Laurens County School Districts 55 and 56 Tuesday. On Monday, students at Laurens Academy, Thornwell Charter School and Summit Classical School returned to campus for the 2021-22 academic year.

The virtual academy created in 2020 giving students an option to attend classes outside of the traditional classrooms are still functioning for students in both districts, but the vast majority students have returned to in-person learning despite an uptick in COVID-19 cases around the state.

Over parts of the past two academic years, COVID-19 cases have caused interruptions at schools and extracurricular activities such as sports and other events. 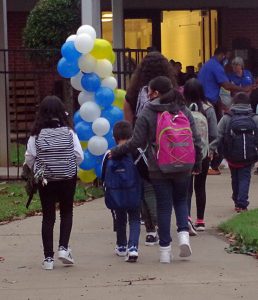 As new school year began in Laurens County, South Carolina Superintendent of School Molly Spearman and Department of Health and Environmental Control Epidemiologist Dr. Linda Bell held a Columbia news conference, calling for the state legislature to be recalled to allow local school districts to mandate masks among staff and students without financial penalties Gov. Henry McMaster said could be imposed if masks were mandated.

Since then, several school districts have flaunted McMaster’s order on the mandates and others, including Greenville – the state’s largest district – are considering the move.

“I have been very clear. I do believe that issue is best handled by local school boards,” Spearman said. “We have two ways to make that happen. Either the legislature comes back in, and I have asked them to do that continually, or this ends up in the courts and the courts resolve this.

“We have got to have a solution for this. Our schools are starting, our educations are worried and we are very concerned,” she said.

At Ford, the number of masked staff outnumbered those unmasked and the children masked seemed to break down fairly evenly.

In Pickens County and Greenwood District 51, COVID-19 outbreaks occurred almost immediately after school began for them several weeks ago, causing the Pickens County’s school board voted to return to e-learning. On Aug. 13, the school district reported that 142 students tested positive for COVID-19 and four staff members and a student were hospitalized. Two staff members were on ventilators, according to a district spokesperson.

Charleston and Richland school districts have returned to their mask mandates despite the funding threats from the governor’s office.

Bell and pediatricians from across the state also spoke at the news conference, saying that wearing a mask is a social responsibility to protect the children.

“I am certain that when history is written, people will look back and wonder on how we were nearing normalcy and then had a dramatic resurgence in this disease given all the tools we have available to prevent what is unfolding right now,” Bell said.

Spearman, the American Academy of Pediatrics and DHEC representatives have lobbied state legislators to return to session to vote to allow local school districts to make their own decisions on mask mandates, but McMaster has remained unmoved.