A carjacking that occurred on I-26 in Laurens County Sunday ended with in Lexington County when the suspect was killed by a Newberry County Sheriff’s deputy.

According to a release Tuesday from the LCSO, Laurens County deputies responded to an incident involving several wrecked vehicles and a carjacking near Exit 60 around 5:50 p.m. Sunday.

The suspect was identified as Phillip John Walden, 40, of Taylors.

According to the LCSO, Walden entered I-26 and lost control of the vehicle, striking another automobile. He attempted to drive up an embankment but rolled back down it and landed upside down. He then got out of the overturned vehicle with a pair of scissors, attempted to stab the other driver involved in the crash and began cutting himself.

He attempted to flag down other motorists as he walked westward in the eastbound lanes. The motorists were able to fend him off and escaped with no serious injuries.

Walden was able to commandeer another vehicle after forcing the driver from it and headed toward Newberry County down I-26, causing several more collisions along the way.

According to reports, Newberry deputies caught up with Walden near mile marker 72 and chased him to exit 97. At exit 91, he continued to wreak havoc as police pursued him, striking several cars in Chapin and a trailer at a Taco Bell.

Walden allegedly rammed a Newberry deputy’s vehicle as the deputy and a South Carolina Highway Patrol trooper attempted to stop the car. Walden finally struck a barrier on I-26 where officers caught up with him.

The officers said Walden did not respond to voice commands and was unfazed by stun guns after the crash. They said he charged at them before the Newberry County deputy shot him multiple times in the chest.

Walden was pronounced dead at the scene.

SLED is investigating the officer-involved shooting. 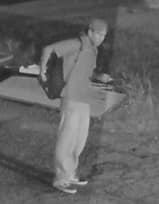 Laurens Police are searching for a person caught on surveillance video for spray-painting buildings on the Laurens Historic Square.

The Laurens Police Department is asking for the public’s help in identifying a male suspect in connection with “tagging” or spray-painting incidents on the Laurens Historic Square.

The LPD has released still photos of the suspect from surveillance cameras on and around the Historic Square.

The last of four suspects allegedly involved in an Aug. 11 theft that left several hundred Piedmont Rural Telephone Company customers without service is behind bars, according to the Laurens County Sheriff’s Office.

William Joseph Godfrey of Enoree was arrested and charged with grand larceny and malicious injury to a telephone or electric utility system.

Heather Nicole Ellason of Woodruff, Nikki Lee Gerber Fields of Enoree and Kelly Wynne Bell of Enoree face the same charges as Godfrey. Ellason is also charged with possession of contraband by a prisoner, two counts of a controlled substance and transportation or possession of stolen nonferrous metals.

A release from the LCSO said a deputy discovered the four suspects on Highway 221 near the Spartanburg County line at the Enoree River bridge.

Godfrey reportedly fled the scene when the deputy arrived.

PRTC employees discovered that lines and wires had been cut, causing the system to malfunction. They also discovered tools used for the removal of wiring and metal materials at the scene.