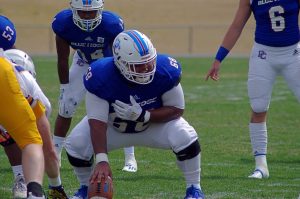 The Presbyterian College football team will hold its annual Fan Day this Saturday beginning at noon at Bailey Memorial Stadium. Gates will open at noon with the second scrimmage of the fall set for 1 p.m…

Following the scrimmage, First-year PC Head Coach Kevin Kelley will address fans and that will be followed by an autograph session slated for 2:45 p.m.

Schedule posters for the 2021 season will be available for fans to pick up and have signed by the Blue Hose.

PC will take the field for practice around 12:15 and the scrimmage set to begin at 1 p.m.

The Blue Hose are 18 days away from their season opener at home against St. Andrews on September 4. PC begins Pioneer Football League action on September 25 with a trip to Dayton (Ohio) to face the Flyers.

PC opens the 2021 campaign on Sept. 4 at 4 p.m. as the Blue Hose host St. Andrews at Bailey Memorial Stadium.

Nagy made seven starts for the Blue Hose during the spring season. He finished fourth amongst PFL linebackers with 7.4 tackles per game. Nagy finished second on the team with 52 total stops while ranking ninth in the league with 6.5 tackles for loss. He began the spring campaign with 15 tackles including a tackle for loss and quarterback hurry against Gardner-Webb. He recorded a pair of tackles for loss against Morehead State. Nagy totaled eight stops and 1.5 tackles for loss against Davidson on March 20. He recorded three consecutive games with six stops with two tackles for loss and a sack being recorded against Stetson. He sits fifth in the Blue Hose DI record book with 233 total tackles as he became the seventh Blue Hose defender in the DI era to record at least 100 solo stops earlier this season.

Nathan Lovette, TE, 3rd Team
The Fort Mill, S.C. native played in six games while making four starts during the spring campaign. Lovette recorded 11 catches for 91 yards and a touchdown. He recorded a catch in all six games he played in during the 2021 spring season. Lovette totaled a season-high three catches for 29 yards and a score in a road contest against Davidson. Lovette added a 20-yard grab against Stetson. He closed out the season with a three catch for 21-yard performance against Drake.

Tyler Huff, QB, 3rd Team
Huff played and started in six games for the Blue Hose. He led the PFL in total offensive yards per game (278.5) and was second in the league in passing yards per game (244.2) which ranked 17th nationally. He tossed for a career-high 365 yards in a 28-24 comeback road win against Drake to close out the spring slate. He was the only quarterback in the PFL to record multiple 300+ yard passing performances (307 at GWU & 365 vs Drake). Huff finished tied for second in the league with 10 passing touchdowns as he recorded a career-high three passing scores in a March 20th game against Davidson. He finished the season with 128 completions on 206 attempts for 1,465 yards and his 10 passing scores along with 206 yards on the ground and three rushing scores.

Noah Mangum, OL, 3rd Team
Mangum played and started all seven games this spring. Mangum was a part of an offense that was second in the PFL in passing as they averaged 257.4 yards passing per game this season. The Blue Hose rushed for 100.4 yards per game on the ground in seven games as well. He was a part of the offensive line that blocked for Delvecchio Powell who totaled 104 rushing yards and a score against Morehead State. The Blue Hose offense recorded three 300+ yards passing performances with 307 at Gardner-Webb and 365 at Drake by Huff along with 323 passing yards by Brandon Thompson against San Diego.