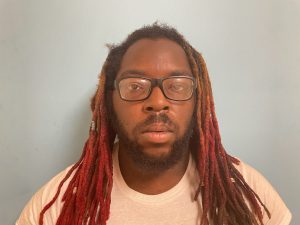 The Hamburglar isn’t the only one in trouble now.

The Laurens Police Department arrested a Laurens man Tuesday following an investigation into the alleged illegal tattooing of a minor inside the McDonald’s Restaurant on Fleming Street in Laurens.

Brandon Presha, 28, of Laurens was arrested after LPD officers investigated a TikTok video circulated on social media that showed a man tattooing another individual at a table in the McDonald’s over the weekend.

According to reports, the person receiving the tattoo was a McDonald’s employee, and customers were frustrated by their wait times. One of them made the video and posted it to social media, and it quickly went viral afterward.

By Tuesday morning, LPD were close had identified Bresha as the suspected unlicensed tattoo artist through interviews and were working on warrants for his arrest.

LPD Chief Chrissie Latimore said they were also trying to figure out exactly how to charge Bresha.

“We’ve never had one like this before,” Latimore said. “We’re quite stunned to say the least.”

Colt Strickland, who owns Forty Fifth Ink Studio in Laurens, said providing tattoos outside of a licensed and clean studio is a dangerous proposition for the person getting the tattoo, the artist and people who may visit there later.

“There’s blood, and you don’t know – somebody could have hepatitis-C or something,” Strickland said, noting that the artists who work in his shop go through rigorous training on sanitization and he makes sure his shop and all work stations are clean. “It can be very hazardous for everybody and the people who eat there later.”

The legal age to receive a tattoo is 18 in South Carolina, and licensed tattoo artists must be at least 21.

Strickland said now that Bresha has been charged with tattooing a juvenile, he will no longer be eligible for licensing as a tattoo artist.

Officials with the South Carolina Department of Health and Environmental Control said in a statement they referred the complaints they received about the tattooing incident, which has since been dubbed on social media as the “McTat,” to the LPD.