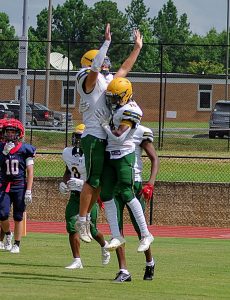 A return to a normal football preseason for local high school teams is hoped by coaches, players and fans to be a prelude to a normal regular season.

But the uptick in COVID-19 cases with its Delta variant across the state is cause for concern as Laurens and Clinton get in their final preseason tune-ups this week.

Those words turned prophetic by Tuesday afternoon when LDHS announced its Aug. 19 JV scrimmage against T.L. Hanna had been canceled due to COVID-19 concerns, and the Raiders’ originally scheduled opponent – May River – Friday in Irmo’s Joe Turbeville Jamboree and another team have dropped out of the event due to COVID-19 issues. Laurens will now play Irmo at 7 p.m. Friday.

The Red Devils are scheduled to compete in the Greer Jamboree Saturday. Laurens Academy has canceled its appearance in the Richard Winn Jamboree due to a rash of injuries to an already thin SCISA 8-man roster.

While those preseason jamborees are still on the schedule, the Aiken County Football Jamboree scheduled for this Friday at Silver Bluff High School was canceled by school district officials this past week.

“The decision… was made by school district athletic directors in an abundance of caution for the safety of student-athletes, coaches, staff members, and families alike,” said district officials in a release. 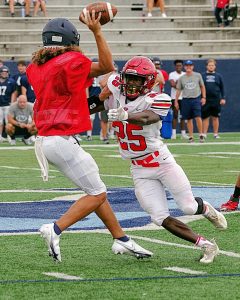 There are no plans to cancel the jamborees in Irmo or Greer, but with the resurgent of COVID-19, school athletic officials are keeping a wary eye on the pandemic that limited last year’s regular season and forced the cancellation of several games, including the annual Clinton-LDHS game.

Laurens Academy played its complete schedule and went on to the playoffs.

The jamborees are to be the final scrimmages for LDHS and the Red Devils prior to Week 0 games scheduled for Aug. 20. Clinton is to host Pendleton, while LDHS is set to visit T.L. Hanna.

The Raiders put in a good showing against BHP on both sides of the ball with senior WR Jayden McGowan scoring twice on big plays and junior WR Jay Pulley and senior RB Ty Roberson adding punch to the LDHS offense as it scored six touchdowns against the Bears. . . . Clinton rolled up points in the second half Monday night in the second half after a nip-and-tuck first half primarily against Chapin’s starters. Junior RB/LB Bryson James and all-state performer Jykorie Gary (RB/DB) stood out against a team with three NCAA FBS Division 1 commits.