By Monday morning, all three county high school football teams were back on the practice field in preparation for their respective 2021 seasons.
Laurens District High, Clinton High and Laurens Academy begin their regular seasons on Friday, Aug. 20 and will be taking part in jamborees the previous week.

“Every day we’ve got to get better,” said Clinton head coach Corey Fountain, whose Red Devils are ranked No. 7 in the S.C. High School Sports Report Class 3A preseason coaches’ poll.

At least for now, the football preseason appears to be a return to normal after the 2020 SCHSL season was delayed and limited by COVID-19. Neither LDHS nor Clinton played a full 10-game schedule. Those teams were also shut out of a shortened postseason with only the top two teams from each region making the playoffs.

Meanwhile, LA won its first playoff game in around a decade last season in SCISA Class A 8-man football and were able to play a complete schedule before bowing out to Holly Hill Academy in the state semifinals. 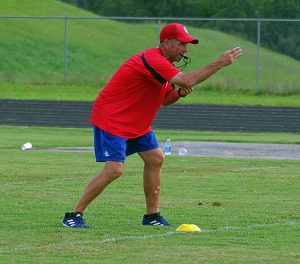 Former Presbyterian head coach Tommy Spangler is a volunteer assistant with the Red Devils this season.

Clinton will host a scrimmage Thursday with Wade Hampton and Blacksburg visiting Wilder Stadium beginning at 10 a.m. The Red Devils head to Chapin for another scrimmage on Aug. 9 at 6 p.m. before heading to the Greer Jamboree on Saturday, Aug. 14.

“What we’ve been stressing today was tempo, attitude and effort,” Fountain said. “That’s what we’re trying to get across — setting expectations and tone on the first two days of practice.”

The Red Devils’ coaching staff is getting help from former Presbyterian head coach Tommy Spangler, who is a volunteer assistant with Clinton this season. Spangler is working primarily with the defensive backs.

“He’s volunteered his time help us become better, and we’re very appreciative to have his help,” Fountain said. “He’s an excellent coach, and we’re blessed to have him.” 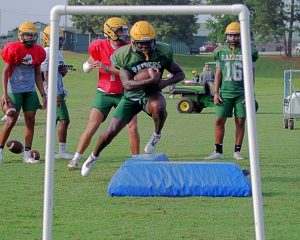 LDHS players were in shoulder pads and shorts Monday morning, returning skill players at key positions, including quarterback James Rawl, running backs Zy Todd and Ty Roberson and receivers Jayden McGowan and Cayson Elledge on offense.
But depth will be a primary concern for the Raiders, who are set to scrimmage Belton-Honea Path Thursday and play in the Irmo Jamboree on Friday, Aug. 13.

LDHS head coach Daryl Smith said the Raiders have lost several players off their projected roster who decided to concentrate on other sports, while another is sidelined for now with a non-football related injury.
Region 2-4A foes Greenwood (No. 2), Greenville (No. 6) and Greer (No. 7) are all ranked inside the top 10 in the S.C. High School Sports Report Class 4A preseason poll.

LDHS has received a boon to its defensive secondary with the arrival of transfer Michael Mankaka from Mayo High School in Rochester, Minnesota.

The 6-foot-2, 185-pound defensive back/athlete announced this past week on Twitter that he has accepted a preffered walk-on offer from Clemson.
“It has been a life long dream of mine to be a part of this incredible program and family,” Mankaka wrote on Twitter. “It is very surreal that I will have the opportunity to be a part of and play for the best program in the country.”

McGowan’s older cousin, Thomas Jones committed to the Commodores his senior year before opting for professional baseball. Jones, a Shrine Bowl selection at defensive back, was chosen in the third round of Major League Baseball’s Amateur Draft by the Miami Marlins in 2016. 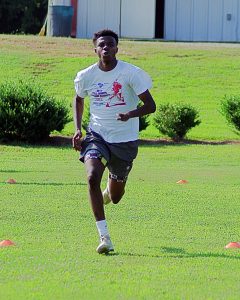 The Crusaders and veteran head coach Todd Kirk will have to work to replace graduated seniors from last year’s squad, including three offensive/defensive linemen, leading reciever Caio Rita and do-it-all quarterback Thomas Lowry.
Seniors Cal Robertson, Will Jones, Dmitri Wells and Diamonte Grant will be expected to fill leadership roles this season for the Crusaders.

The first meeting of the season for the Touchdown Club is set for Aug. 26 and will feature the county’s three high school coaches as guest speakers.