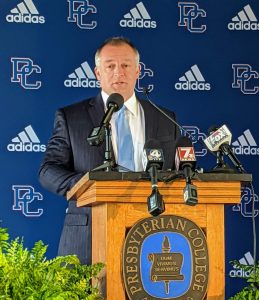 Presbyterian was selected to finish fifth in the Pioneer Football League preseason poll, as voted on by the league’s head coaches, the conference announced on Tuesday.

The Blue Hose earned 59 points as they enter the season under the direction of first-year head coach Kevin Kelley. Presbyterian embarks on its first full season in the PFL after playing a six-game schedule during the 2021 spring season.

St. Thomas was picked to finish eighth (36 points) in its first PFL season. Marist and Stetson followed in a tie for ninth place (35 points each) with Butler (15) rounding out the 11-team poll.

The Blue Hose begin the 2021 season on September 4 as St. Andrews visits Bailey Memorial Stadium for a 4 p.m. kickoff. PC’s first PFL contest is slated for September 25 when Presbyterian heads to Ohio to face Dayton.

PC scored wins over Davidson and Drake this past spring en route to a 4-3 record.