Laurens, S.C.  – After months working to get the owner of Forest Lawn Mausoleum to make badly needed repairs, Chuck Bobo, the director of Building Codes for Laurens County, placed a condemned notice  on the structure today, Tuesday, July 27. 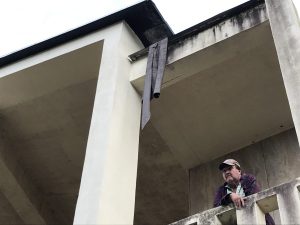 Since early last fall, crypt owner David Owens of Laurens has tried to get the owner of Forest Lawn Mausoleum to return calls about repairing the damage but the company long ago quit answering his calls.

“We have been working with South Carolina Labor, Licensing and Regulations Agency and have written a summons to take Forest Lawn to court,” said Bobo. “The building is posted as condemned and we’re working with the owners to get this resolved. They claim they have secured a contractor and they gave us his name and a cost estimate but there is no start date.”

Bobo said the local owner put up tape to keep people out prior to the county’s action today.

“The owner put up the tape a month or two ago and we put the condemned signs on it today,” Bobo said. 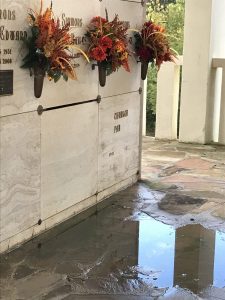 Water which was already collecting after each small rainfall last October continues to flow as the cracks in the walls have gotten larger.

Tarp had been flowing down from the roof since last summer and open holes in the ceiling had been allowing water to pool at the base of many of the crypt fronts. Cracks had already been visible in the upper walls above other crypts and since fall the water issues have only gotten worse.

Forest Lawn Cemetery and Mausoleum are in what’s referred to as a “donut hole,” and though it’s surrounded by the City of Laurens it’s actually not within Laurens City Limits. It didn’t keep Laurens Mayor Nathan Senn from also making calls to the owner in Pennsylvania last fall and his calls also went unanswered, as did calls made by The Advertiser.

Now that the structure has been condemned, Owens said he hopes that the company will do the right thing.

“Even the local office quit taking my calls,” Owens said. “It’s disrespectful to the people buried there.”