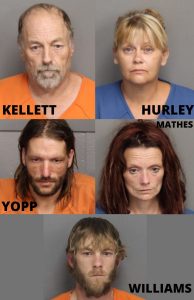 The Laurens County Sheriff’s Office has arrested five people on drug, theft and animal cruelty charges, and investigators believe they were at least two of them were involved in a cockfighting operation on Hope Road in Gray Court.

In all, the Laurens County Animal Control seized more than 400 animals, including 12 horses, 30 dogs, about 356 chickens, four hogs, three piglets and eight rabbits.

Over the weekend, Robert Milton Kellett III, 54, and Tina Messer Hurley (Kellett), 50, were arrested and charged with possession of a stolen vehicle (the vehicle was reported stolen out of Simpsonville), receiving stolen goods, trafficking methamphetamine and 19 counts of ill-treatment of animals with torture – felonies – and one count of ill-treatment of animal, overworking.

Kellett was also charged with criminal conspiracy for his alleged involvement in the cockfighting operation.

Hurley and Kellett remain in the Johnson Detention Center, each on bonds totaling more than $100,000.

LCSO investigators said, “many items located on the premises led investigators to believe there was a cockfighting operation being conducted.” 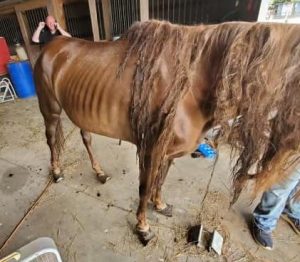 This horse was among 400 animals seized from Hope Road in Gray Court.

Heidi Tenille Mathes and Jacky Dean Yopp, Jr., both of Enoree, were arrested and charged with distribution of meth.

According to the LCSO, several roosters were tethered to the ground by leashes with no access to water.

Investigators also discovered a large barrel with deceased chickens and other dead chickens decaying on top of a cage.

The horses were malnourished with severely overgrown hooves and poor teeth. Other animals also were under-weight with no visible access to water.

Several agencies, including the Charleston Animal Society, Anderson County PAWS, the Humane Society of the U.S. and local residents have assisted in relocating and caring for the seized animals, the LCSO said.