From the Wednesday, July 14 issue of The Advertiser 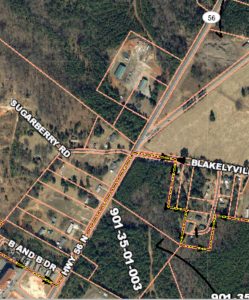 Clinton, S.C. – Clinton residents in the area just north of the city limits are concerned about a company, H20 Blue, LLC,  which is seeking approval from DHEC for the construction of a “hauled waste receiving and evaporating facility” on Highway 56 N, according to an online DHEC permit request.
“This is just outside the city limits, and neither the city nor Laurens County Water and Sewer Commission have anything to do with it,” Clinton Utilities Director Joey Meadors said Monday.
“This would not be waste produced in Laurens County,” Meadors said, explaining it seems to be a system which mixes the waste with water and other materials  and then lets it evaporate.
The property, located at the intersection of Highway 56 N and Barrel Stave Road, includes two tracts which were sold to H20 Blue LLC in February 2020. It had previously been owned by Bagwell Contractors, Inc., which had relocated its business to Hurricane Church Road.
Businesses and residents in the area are served either by the City of Clinton or LCWSC, but neither entity was contacted because the proposed facility would be bringing in industrial waste from North Carolina and South Carolina, according to information gleaned so far by Jeff Field, executive director of the LCWSC.
“It’s a no-discharge facility so it will not discharge to creeks or other body of water.  We think its purpose is to treat sewage that is not easily sent to a public wastewater plant such as ours.”
Unlike the City of Clinton or LCWSC, this company is a for-profit group which would use tanker trucks to bring in industry waste, Field said.
“They will not be serving the general public because either LCWSC or City of Clinton have the service rights in that area. We are right now making the assumption that they would handle industrial waste so a potential industry would not need to build its own pretreatment before sending sewer to us, because otherwise they would not be cost effective. We are still researching it.”
Neither of the utility directors were contacted by DHEC, which sent letters to residents of the area, as according to law from DHEC’s Bureau of Water, and provided a proposal and fact sheet online. The letter explained that the facility first requested the permit in June of 2019, prior to its purchase of the property in February 2020.
DHEC explained it would not be permitted to treat hazardous waste but rather wastewater by evaporation “using two 400 gallon per hour thermal evaporators.” Remaining residue would be mixed with sawdust and transported to a landfill. DHEC has completed its review but a final decision won’t be made until after the comment period, which ends Aug. 1.
Community residents, elected officials and local business owners met Tuesday night (July 13) at the nearby Clinton House Plantation to develop a strategy to try and prevent the company from locating on the almost 8-acre tract.
Tommy Dukes, who owns some of the property adjoining the tracts, expressed concern because of the proposed facility’s proximity to businesses just past the I-26 intersection and many residents’ homes.
“We are concerned about the possible negative impact and possible pollution of the air, waterways, soil and groundwater,” Dukes said. “Trucking industrial wastewater from our state and apparently other states doesn’t seem to be something we want or need in that location.”
While the proposal claims that the company produces no discharge which could affect water or soil, DHEC is requiring three drilled wells to monitor for any contamination.
“They obviously are worried about spills,” Dukes said. “Supposedly, there is an obnoxious odor associated with this process and the proposed site is less than 2500 feet from hotels, restaurants, and residential property is truly next door. Also there has to be some contamination of the air if unpleasant smells are a byproduct.”
Dukes said the treatment plant would be too close to businesses and homes.
“It seems reasonable to me that such a risky business should not be located near other people or waterways. I bet almost everyone in the area have wells they depend on for water. The reasons are many.”
Field said that he and his staff will continue researching the company and, if it sees any reason to do so, the utility would provide concerns or objections to DHEC by the Aug. 1 comment deadline.
The business owner could not be reached for comment.  On Thursday morning, Clinton City Council included a discussion of the issue in a special called meeting set for 2:30 p.m. on Friday.