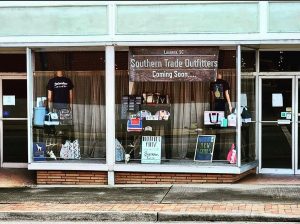 Southern Trade Outfitters is expected to be open by Oct. 1 on the Historic Square in Laurens.

A new retailer is headed to the Laurens Historic Square and will occupy the former John Graham department store building on the north side of the square.

Christie Finley, owner of the Southern Twist boutique and gift store located a few doors down from the planned Southern Trade Outfitters, said in a Facebook post that she plans on opening her new store in October of this year.

Finley also said she began the process of stocking the store with suppliers back in February, choosing to create a new business in Laurens as opposed to expanding Southern Twist with a second location in another city.

“I felt like we should do it in our hometown,” she said. “Laurens needs more.”

Main Street Laurens Director Jonathan Irick said the new store will fill a void both on the square and in the Laurens-Simpsonville-Greenwood area.

“Main Street has done market analysis, and an outfitters is one of the businesses we talked about,” Irick said. “We feel like an outfitters store will work here. We have Lake Greenwood and Lake Rabon here for fishing, and we have a lot of hunting and other outdoors activity, but there are no outfitters in Greenwood or even in Simpsonville.”

Irick also said that square has also been void of retail stores geared toward men, and Southern Trade Outfitters will change that as well.

“They will offer namebrands that people are used to – not just hunting and fishing equipment but t-shirts and coolers and things like that,” Irick said. “We think this is a great new business to open downtown, and Christie has a great track record with Southern Twist.”

The former John Graham department store building was most recently Hummdingers, which sold guns and ammunition and other hunting equipment.