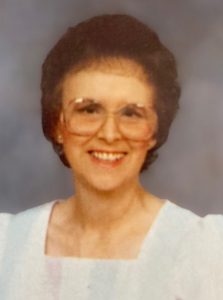 Born in Knoxville, TN, she was the daughter of the late George R. and Virgie Perkey. She retired from The Palmetto Bank, was former member of Lucas Avenue Baptist Church and a later member of Surfside Baptist Church. Shirley loved spending time with her family, especially her grandchildren and her great-grandchildren.

In addition to her parents, Shirley was predeceased by two husbands, Maurice Taylor and John Hogan and a brother, Robert “Bobby” Perkey.

Funeral services will be held at 2:00 PM on Monday, July 5, 2021, at Martha Franks Rasor Chapel conducted by Rev. Leon Bible and Dr. H. Lawton Neely. A private burial will be held at Forest Lawn Cemetery.

The family will receive friends at the Martha Franks Rasor Chapel immediately following the funeral service.