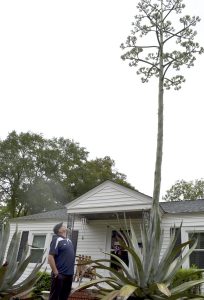 “Century Plant” – At 6’2″, Rob Taylor is dwarfed by the 23-year-old Agave americana blooming at his 545 East Main Street home in Laurens.. (Photo by Judith Brown)

Laurens, South Carolina – Laurens drivers have been doing double takes and even coming to complete stops in the middle of East Main Street in Laurens since a “Century Plant” stalk began rising from one of two giant agave plants in Nellie Taylor’s yard.

“Those plants are 23 years old,” said Nellie Taylor, describing how she was given a grocery bag filled with tiny offshoots of Agave americana from her niece who had a large prolific plant in Lexington.

“They were little, tiny babies, no bigger than the palm of my hand, and I gave some of them away. I guess these plants are scattered all over Laurens, because we had a yard sale and I was just giving them away,” Nellie said. “I knew they could bloom but I kept waiting and I thought it never would bloom.”

She was very excited, then, in April when her son Rob Taylor, who now lives with his family in his mom’s home, began to see that a stalk was growing among the giant leaves. 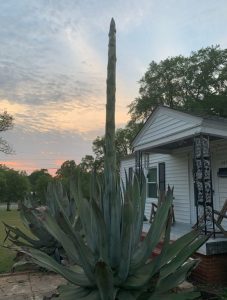 By April 29 the stalk was growing about a foot a day. (Photo Rob Taylor)

“When it started, it shot up like a bullet,” Nellie said. “At first it was as thick as a light pole but then started thinning out as it got taller.”

“We first spotted it April 20 and I used the security cameras to do a time lapse,” Rob said. “It grew about a foot a day, and my friends started making jokes about ‘Where’s the ranch dressing?’ because it looked like a giant asparagus.”

The century plant Agave actually is within the Asparagaceae plant family, and is native to Mexico and Texas. Different varieties of the large sharp-leaved plants are grown over much of the nation’s South and Southwest. Most of them bloom within 30 years, and some owners have to wait more than 40 years to witness the event. 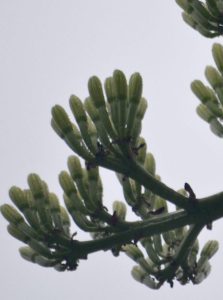 The tendrils have emerged from the ball-shaped buds and flower puffs are expected soon. (Photo by Judith Brown)

Nellie doesn’t get up and about a lot these days, so she watches the plant’s progress from her window or the porch. It’s exciting to finally see it, but also bittersweet since they have learned that the large mother plant which surrounds the stalk will likely begin dying during the months which follow the bloom.

“I will hate to lose the plant,” Nellie said, although she admits keeping the two giant agaves from covering the walkway has been a tough job for Rob for many years.

“I don’t have a green thumb but I’ve researched it on YouTube,” Rob said, explaining he learned first-hand that not only the sharp tips but the juices inside the leaves can be dangerous.

“I didn’t know and I used a chain saw and the juice from it got on my legs and burned them almost like an acid burn, so I didn’t do that again,” Rob explained.

This week Rob went by to see a stalk on Oakwood Drive in Laurens which had bloomed last June, and saw that the stalk was still there but, as expected, the large plant around it had died back.

Now, however, with the buds having begun to separate, the Taylor family and those driving by on East Main are anticipating the puffy blooms which are expected to come up from the tendrils.

“Look, there’s somebody else stopping to take pictures,” Nellie said, pointing to a man in a small pickup who had stopped in the eastbound lane in front of their home Tuesday morning. “That’s the second one this morning!”

This article is on Page 2 in the Wednesday, June 23 issue of The Laurens County Advertiser.