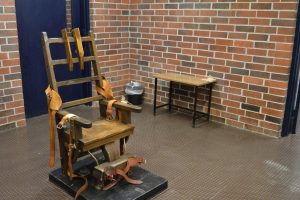 South Carolina’s electric chair could be used for the first time since 2008 if appeals for convicted murderer Brad Sigmon fail. Sigmon is scheduled to be executed at 6 p.m. Friday.

UPDATE: The South Carolina Supreme Court upheld an emergency appeal and stayed the executions of both Brad Sigmon and Freddie Owens, pending the formation of a firing squad, giving the convicted a choice between firing squad and electrocution as stated by law.

Barring a successful, last-minute legal appeal, the South Carolina Department of Corrections is set to carry out its first execution in more than a decade this Friday.

Brad Sigmon was to die in the electric chair at 6 p.m. Friday in at the Broad River Correctional Institute in Columbia. Sigmon was convicted of a 2002 double homicide in Greenville. He beat the parents of his estranged girlfriend to death with a baseball bat.

A Federal Judge denied an appeal by Sigmon on June 11, setting the wheels in motion for the state’s first execution since Jeffrey Brian Motts was put to death on May 6, 2011. James Earl Reed was the last man executed in South Carolina’s electric chair on June 20, 2008.

Sigmon has been on death row since his sentencing in 2009, but the drugs used in lethal injections by the state have been unavailable, forcing the state to return to the electric chair or a firing squad for executions until drugs are available.

The attorneys for Freddie Owens, who is scheduled to be executed on June 25, have joined Sigmon’s lawyers in the appeal process. Owens, 43, is also convicted of a Greenville murder. He shot and killed a convenience store clerk during a robbery spree in 1997.

Attorneys filed an emergency appeal on behalf of both men Tuesday.