Clinton, S.C. – Last week a Clinton contractor was finishing the interior of a new little red building in time for a Family Fun Day in Clinton, which is serving as the launch of Thornwell’s reopened LushAcres Farms and the first day that the market will be open for the public.

Planned for this Saturday, June 19, 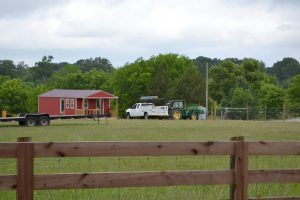 from 10 a.m. to 2 p.m., the family-friendly event will introduce the community to the new LushAcres Farms, which already includes a market that will be open three days a week for purchasing the farm’s fresh summer vegetables, fresh eggs and pasture-raised beef and chicken just back from the processor.

With plenty pf space for parking, the entrance is located at the corner of W. Maple and Holly streets, and its address is 1875 West Maple Street Extension, Clinton.

By fall the farm plans to open its first corn maze and in the spring its first strawberries should be ready to pick, followed by blueberries and blackberries next summer.

Christmas trees, which were planted in December, are four or five years away from maturity, as are the very young pecan trees, said Farm Director Brandon Bowers, a civil engineer and Upstate farmer. 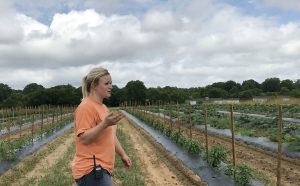 The farm currently includes raising pasture-raised beef and chicken for meat production and it will be adding goats and sheep. Summer vegetable crops include everything from squash to watermelon.

“We got in about 300 laying hens and it usually takes a little while for them to start laying again, but the next day we had 200 eggs so we were busy,” Bowers chuckled as he relayed the story to Thornwell President Elliot Smith in a meeting on Monday morning.

The new LushAcres Farms is the result of three years of planning and counsel, Bowers said, which included a steering committee made up of agriculture, business, city and county leaders who helped brainstorm with Thornwell staff for about a year. A modern agritourism approach was developed out of those meetings, and it’s much more diverse than the LushAcres Dairy Farm which closed in 2008.

President Elliot Smith acknowledged that, obviously, a choice to sell the 130 acres for development would have been a much simpler way to make a large amount of money for the non-profit, but that was never considered as an option, he said. While the land isn’t needed to directly provide food for the children like when it opened in 1875, Elliot and Bowers said it’s important that Thornwell remain a blessing for families of Laurens County and a blessing for the Clinton community.

“This was always about reimagining the farm and looking for opportunities for it to generate revenue to support the ministry,” Bowers said.

Concession sales will contribute toward the city’s hospitality tax base and event fees will be collected for state tourism funds. Bowers also expects people who come from out of town will search out food and more activities within downtown Clinton.

Primarily, though, the agritourism model allows the non-profit to raise funds for its ministry in a sustainable way and, at the same time, provide great memories for families and educational opportunities for school children who will be able to visit the farm in future years.

Two of the farm staff hold degrees in agriculture education and another is a former educator who has farmed for 30 years.

“Our objective now is to bring people to the farm through agritourism,” Bowers said, “and to bring folks that may have never heard of Thornwell to experience it and to be exposed to the Thornwell ministry at large.”