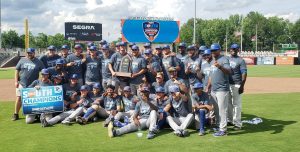 PC baseball captured its first Big South Championship and its automatic bid into the NCAA Tournament.

The Presbyterian College baseball team made history this past weekend and will come face to face with a bit of its own as the newly crowned Big South champion Blue Hose head to the NCAA Regional Friday at Vanderbilt’s Hawkins Field.

There, PC will face No. 4-ranked Vanderbilt and former PC head coach Tim Corbin, who was at the Blue Hose helm from 1988-93 and helped jumpstart the once-dormant program.

Some three decades later, the Blue Hose (22-21) captured the program’s first Big South Conference championship to earn its first NCAA Tournament bid and setting up a meeting with the Commodores (40-15).

The game is set for 7 p.m. Friday and will be aired on the SEC Network. On the other side of the bracket, third-seeded Indiana State (30-19) is to face second-seeded Georgia Tech (29-23) Friday at noon.

Vanderbilt is making its 15th straight NCAA regional appearance – all of them under Corbin, who weighed anchor with the Commodores in 2003 and led the program to two College World Series titles.

PC head coach Elton Pollock, who played for Corbin at PC, agreed that Monday’s early afternoon announcement aired on the ESPN2 NCAA Selection Show for the tournament, was the biggest day in the program’s Division 1 history.

Pollock said 48 hours after rallying to beat top-seeded Campbell 8-5 Saturday for the Big South title in Fayetteville, North Carolina have been “a whirlwind.”

The Blue Hose, who used a late-season surge to make the four-team tournament field as the No. 4 seed, started their championship run with a 7-2 win over Campbell Thursday and followed that with a come-from-behind 9-6 win over Gardner-Webb, scoring three runs in the top of the ninth to down the Bulldogs.

In the championship game Saturday, tournament MVP Zacchaeus Rasberry gave the Blue Hose the insurance they needed with a two-run single down the left field line to make it 8-5. One batter earlier, Eric Toth walked with the bases loaded, scoring Jake Wyandt with the game-winning run.

Toth, who batted a team-best .538 for the tournament, went 2-for-4 at the plate and drove in four runs in the title game, then pitched the final inning without allowing a baserunner to pick up his eighth save of the season. He was PC’s sixth pitcher on the day.

Rasberry hit .500 for the tournament with two home runs and 10 RBI.

The Blue Hose started the season 2-8 and played below .500 for much of the season, but went 8-2 over their final 10 games, winning eight of their last nine.

PC’s season began with three losses at then No. 17 Auburn, and the Blue Hose will now face another SEC foe in Vanderbilt, which is 3-0 against PC. The two programs met once in 2013 and twice in 2018. 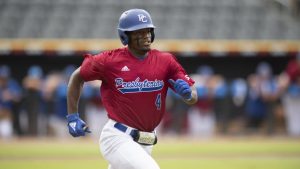 Under Corbin, the Commodores have supplied several first-round draft picks to Major League Baseball, and this year is expected to be no different with pitchers Jack Leiter and Kamar Rocker, both right handers coveted by Major League teams. Leiter is the son of former big-league hurler Al Leiter, and Rocker is the son of former Auburn star Tracy Rocker, who won the Lombardi Award and Outland Trophy with the Tigers and played four seasons in the NFL.

Pollock said facing his old coach and mentor, Corbin, in the most important game in franchise history will be special, but the idea is to go to Nashville and beat Corbin and the Commodores.

“Our routines will be the same,” Pollock said. “But, obviously, it will be a different environment, so we’re excited about it – to put the kids there and give them something to strive for every year, but, ultimately, we want to prepare and go up there and win the baseball game.”