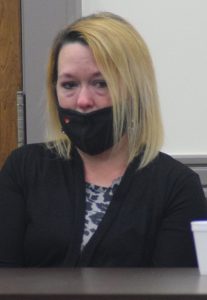 The Laurens woman who infamously allowed a dog to starve nearly to death in her backyard in 2018 will spend the next 90 days in jail after a jury convicted her Thursday afternoon of ill-treatment of animals.

Elizabeth James Morton was found guilty by the jury of six men and six women, and Judge Donald B. Hocker imposed the maximum sentence of 90 days in jail and a $1,000 fine. The jury deliberated for about one hour, 20 minutes before delivering its verdict.

While the jury found Morton guilty of felony ill-treatment of animals, it did not grant the prosecution’s wish for a guilty verdict on a portion of the state law that includes harsher punishments for “torture and torment” of the animals in question. If Morton had been convicted on that section of the statute, she could have received up to five years in jail and a $5,000 fine.

Prosecuting attorney Warren Mowry argued that leaving the Mastiff mix later called Champ, which had belonged to Morton’s ex-boyfriend, without food or water and infested with maggots and hook worms constituted “torture and torment” under state law.

The jury disagreed, recognizing that Morton had abused the dog but stopping short of convicting her on the section of the statute that included the harshest penalties.

Morton took the stand in her own defense Thursday morning, breaking down in tears several times on the witness stand while admitting that she “could have done more” for the dog she knew as Ace.

Public Defenders Joel Broome and Catherine West said the conviction on the lesser charge was exactly what they sought as they attempted to reach a plea arrangement soon after Morton was arrested.

They portrayed Morton as a woman overwhelmed financially and emotionally after her husband, who also testified in her defense Thursday morning, had moved out following an argument. They said hook worms caused the dog’s poor condition, which included being about half of its normal bodyweight, not starvation.

They also asked Hocker for leniency before sentencing.

He declined that request.

“I can’t believe that you allowed the dog to get in that condition,” Hocker said, speaking directly to Morton before passing sentence. “It’s hard for me to wrap my arms around that.”

The story of Champ gained national and international attention after his rescue from the home. Mowry announced during sentencing that the dog is living “a good life” in Delaware and Florida with his new family.

For more trial coverage, read Wednesday’s edition of the Advertiser.