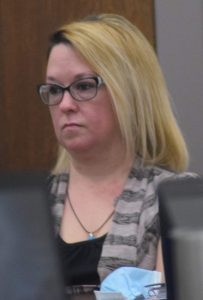 The criminal trial of a Laurens woman accused of starving a dog nearly to death in 2018 began Tuesday at the Laurens County Judicial Complex.

The prosecution called two witnesses Tuesday morning with another who was set to testify during a short afternoon session in the trial of Elizabeth Lena James. James, 32, faces a felony charge of ill-treatment of animals.

According to prosecutors, James intentionally neglected the care and feeding of her ex-boyfriend’s dog, a Mastiff mix then called “Ace,” for 21-30 days. The emaciated dog, which has been renamed “Champ,” was discovered chained to a tree in James’ yard on Lisbon Road by a neighbor.

“I thought he was dead,” said Thomas Moore, a neighbor who went to check on the dog and took him from James’ property to his own after discovering that the dog was still alive.

The plight of Champ became an international story, going viral on social media.

Investigators said James starved the dog on purpose to get revenge on her ex-boyfriend, who left it in her care approximately a month before he was found by Moore.

During opening statements, 8th Circuit Assistant Public Defender Catherine West said reports that James purposefully starved the dog to get back at her ex-boyfriend were “fake news,” and the defendant has since been unfairly vilified through the media and on social media.

“(During this trial), you will listen to how the media took control of this case and how the truth became fiction and became fake news,” West said. “(James) tried to do (her boyfriend) a favor, and that favor turned into her worst nightmare.”

West and Public Defender Joel Broome also claimed James attempted to feed the dog and provided water, but it refused to eat, saying that its condition, which included maggot infestations and malnutrition, was caused by hook worms.

Moore testified that he took the dog, which was more than 50 pounds underweight, over James’ objections.

“When I scooped him up, he screamed because every bone in his body popped,” Moore said.

He said he gave the dog some food and Gatorade and called then Laurens County Animal Control Supervisor Giles Gilmer for help.

Gilmer said he did not investigate the area where the dog was kept and proceeded with the citation and seizure of the dog after interviewing James.

Following a meeting with investigators from the LCSO, two days after the dog was taken from James’ property, the LCSO upgraded the charges to criminal and arrested James.

Gilmer took the dog to the Clinton Animal Hospital where Dr. Jenifer Dixon gave him the option of trying to save it or putting it down to end its suffering.

He said he chose to give the dog a chance, posting a photo taken by Moore on Facebook as he sought a rescue organization to take over expenses for its long-term care. Rescue Dogs Rock of New York City agreed to take over the dog’s care and expenses, renaming him Champ and raising funds for his medical bills.

A “Justice for Champ,” Facebook page appeared soon thereafter as the dog was transferred to an animal hospital in Columbia by the rescue for extended medical care.

“I had a choice to make,” Gilmer said of his decision against euthanizing the dog. “I looked in his eyes and saw he had the will to live.”

The trial is set to continue today as defense witnesses are called to the stand.

If convicted by the jury of six men and six women, James could face a maximum of five years in prison and a $5,000 fine.

Note: On Tuesday afternoon, the defense objected to the absence of LCSO Maj. Chris Martin, who handled parts of the LCSO investigation and made statements to the media about the case. He is on vacation, and Judge Donald B. Hocker is weighing whether or not to continue the case until next week, allowing Martin time to return, or allow a video conference call with the officer.